Children’s Literature Supports a Sense of Place through Local Connections

Posted on October 14, 2019 By Hilltown Families 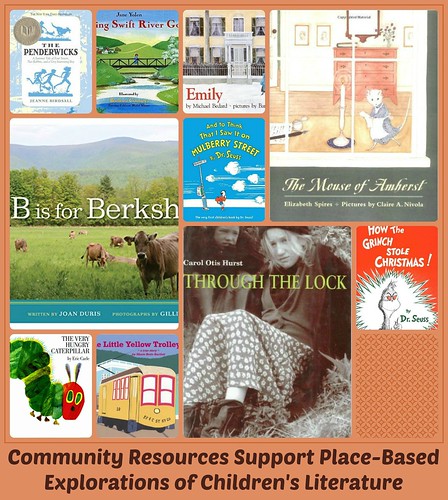 Drawing inspiration from the pages of a favorite picture book, families can embark on place-based studies of children’s literature, local history, and the local landscape.

Thanks to western Massachusetts’ incredibly high concentration of resident children’s authors and illustrators, as well as the many picture books set in the area, the region is chock full of opportunities to engage in place- and community-based studies of exciting and engaging children’s literature.

From landmarks to landscapes, museums to meet-the-author events, families can utilize local resources in order to deepen their understanding of stories, explore the role of the local landscape in specific children’s books, and learn about the methods employed by local authors and illustrators.

Amherst’s Eric Carle Museum of Picture Book Art stands out as western Massachusetts’ largest children’s literature-centric museum. Located on the campus of Hampshire College, The Carle is a gem not only within the local community, but on a national scale as well – it is the only full-scale museum of its kind in the entire country! Visitors to the museum can explore three art galleries featuring permanent and rotating exhibits of work from children’s illustrators (including Carle himself). Additionally, the museum offers an art studio for exhibit-inspired creativity, a picture book library in which to enjoy storytime, and a theater in which author and artist talks are often given. Families can visit the museum to explore exhibits, and to learn about the cultural, historical, and artistic relevance of picture book art.

In addition to the extensive educational opportunities offered by The Carle is a handful of both permanent and rotating exhibitions at other museums across the region. At Northampton’s R. Michelsen Galleries, an exhibit of children’s illustrations is shown annually every autumn.

The Norman Rockwell Museum in Stockbridge often offers exhibitions featuring the work of notable children’s illustrators, and permanent collections and exhibits at the museum spotlight the illustrations of Rockwell who, while never a children’s illustrator, made significant contributions to the world of illustration. Families can visit the museum to browse exhibits featuring Rockwell’s work, and can explore the Berkshire landscape (namely Stockbridge’s Main Street) that inspired some of Rockwell’s most iconic works.

Stories in the Local Landscape

In addition to rich resources for supporting the study of local authors and the art that makes children’s books so engaging, there are many great works of children’s literature that are set within the landscape and communities of western Massachusetts. From picture books to chapter books for early readers, these stories are place-based gems for local families.

While a great many Dr. Seuss books were created thanks to inspiration offered by the urban landscape of Springfield, And to Think That I Saw it on Mulberry Street comes straight from the city’s streets (one in particular!) – families can visit today’s Mulberry Street in order to imagine the story happening within a real-life setting. Though it cannot be confirmed, there is much speculation that Seuss’ How the Grinch Stole Christmas! may have been inspired by Mt. Tom, which bears similarity to the Grinch’s beloved Mount Crumpit.

Amherst is spotlighted in both Michael Bedard and Barbara Cooney’s Emily and Elizabeth Spires and Claire A. Nivola’s The Mouse of Amherst, both of which teach children about poet, legend, and local Emily Dickinson. The nearby Quabbin Reservoir and the former Swift River Valley are spotlighted in Jane Yolen and Barbara Cooney’s Letting Swift River Go, which uses haunting imagery and beautiful illustrations to tell the story of the tension between rural and urban the surrounded the reservoir’s creation.

The history behind Shelburne Falls’ beautiful Bridge of Flowers is shared within the pages of local author Marie Betts Bartlett’s The Little Yellow Trolley Car, A True Story, which teaches readers about the trolleys that once carried West County residents to Colrain and Greenfield. The Berkshires are featured in recently-released book B is for Berkshires by Joan Duris and Gillian Jones. The book’s alphabetical structure pairs simple verses with photographs of beautiful Berkshire locations, many of which might be familiar to young readers!

Western Massachusetts is the setting within a few chapter books for young readers, as well. 19th century Northampton comes to life in Carol Otis Hurst’s Through the Lock, while Amherst’s Wildwood Elementary serves as school for the children in Jeanne Birdsall’s The Penderwicks.