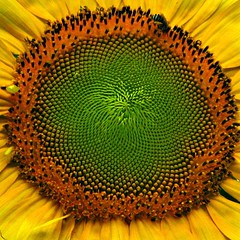 The Fibonacci sequence describes the pattern in which flowers fit the most seeds possible into their centers.

Nature is filled with patterns – spirals, in particular, are especially noticeable in species of plants and animals. Sunflowers, for example, seem to spiral their seeds from their centers in some sort of mathematical pattern. Snail shells, too, show growth rings that become gradually larger as they spiral away from the shell’s center. Evergreen cones, heads of broccoli and cauliflower, and tree branches all display noticeable iterations of this spiraling pattern, too.

The spirals that appear all around us are no accident of nature – while they’re beautiful to look at, their purpose is much more important than vanity alone. Beneath the aesthetically pleasing shapes of petals, seeds, and branches are two fascinating mathematical concepts that explain nature’s tendency to expand in spirals.

The Fibonacci Sequence and the Golden Ratio describe, in mathematical terms, the reasons for nature’s plethora of spiral patterns. It is a series of numbers (1, 1, 2, 3, 5, 8, 13, 21, 34, 55, etc.) in which each number in the pattern is equal to the two numbers before it – for example, 1+1=2, 2+1=3, and 2+3=5. Meanwhile, the Golden Ratio is a number called phi, which is equivalent to roughly 1.618. The ratio was originally discovered in order to describe the relationship between the longest and shortest sides of a rectangle thought to be the most beautiful to the human eye, but it is very closely related to the Fibonacci Sequence. If you divide any two consecutive numbers in the sequence – 55 and 34, for example – the quotient will be phi.

So what do these numbers mean to us as amateur mathematicians and naturalists? They help us to understand the deeper non-aesthetic meaning behind the patterns that we observe in nature. The Fibonacci sequence describes the pattern in which the petals of flowers grow, the number of spirals of seeds that evergreen cones have, and the pattern in which flowers fit the most seeds possible into their centers. Directly related to this is the Golden Ratio’s determination of the exact placement of each of these petals, seeds, and seed pockets. Each new petal, seed, or seed-holding pocket in a cone grows in a place whose relationship to the one before it is determined by this special number. Each new seed, leaf, etc. appears at an angle that is 1.618 rotations from the one before it – phi determines where each new seed or leaf will appear.

Skeptical? Try it out for yourself. In order for plants to have the best possible chance at survival, they need to pack in the maximum number of seeds that they can in the most efficient way possible. When the place in which new seeds are located is determined by phi, then there is no extra space between seeds – the maximum number have been made to fit. (Additionally, testing out seed patterns based on non-phi numbers is a great way to experiment with the mathematical reasoning behind non-Fibonacci patterns!)

Once your family has a solid grasp on where to find the Fibonacci Sequence and where to see the Golden Ratio in action, do some collecting! Challenge your kids to see how many different natural objects they can find throughout the summer that show these relationships – they may be surprised to see how diverse their collection will become.