Posted on February 26, 2019 By Hilltown Families

Hilltown Families and Mass Appeal (a weekday, hour-long lifestyle program on NBC) have teamed up to offer a live monthly segment on WWLP 22News!  Each month, community-based education specialist and Hilltown Families’ Founder, Sienna Wildfield, joins Mass Appeal hosts to talk about ways to engage in your community while supporting the interests and education of your children (and yourselves!).

This monthly segment continued on Monday, February 25, 2019, with Sienna and Danny talking about a few early signs of spring we can look for through the lens of local species, agriculture, and native habitat. 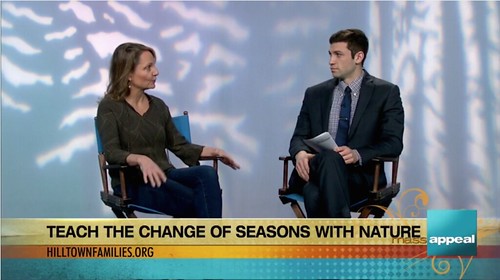 As the weather temperatures fluctuate in the late winter and early spring, track the seasonal changes through the lens of local species, agriculture, and native species.

Mass Appeal is a live weekday program that airs at 11am on 22News (Springfield, MA).

Sienna’s next visit to the Mass Appeal studios will be Monday, March 25th, 2019!