Posted on January 7, 2019 By Hilltown Families

I have worked as the Director of the Hilltown Food Pantry in Goshen for 25 years. When asked why I do this work, one thing that comes to mind is the good, old bumper sticker that reads, “think globally, act locally.” We all hear of the horrible hunger, even starvation for some, all over the world. But we also know that food insecurity and hunger exist right here in Hampshire County. In fact, today, Hampshire County is home to over 30,000 food insecure individuals. 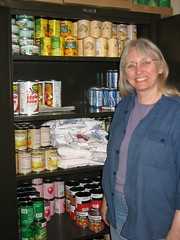 Three decades ago the term “food insecurity” was not familiar to most of us. But some folks in the hilltowns were becoming aware of its reality. They thought that there needed to be a community response, a concerted effort to help our fellow neighbors who were facing a serious need. Hampshire Community Action Corporation (HCAC) responded to help the towns set up two pantries; one to serve the southern hilltowns and one to be located in the northern hilltowns. In 2005 when HCAC was in its final days, David Keilson of Chesterfield stepped forward to find a new parent agency for the Hilltown Pantry. His advocacy worked and the pantry was adopted by Northampton Survival Center.

The Hilltown Pantry had several different locations over the years before moving into the Goshen Town Office Building in the early 2000’s. The Town of Goshen has been a very welcoming and supportive host ever since. This is a regional program serving about 280 individuals from ten communities in Western Hampshire County: Chesterfield, Cummington, Goshen, Haydenville, Huntington, Middlefield, Plainfield, Westhampton, Williamsburg, and Worthington. Clients drive sometimes thirty minutes or more to access the pantry at its Rte. 9 location.

The clientele we serve is diverse, including the homeless; folks who are unemployed and waiting for food stamp assistance, or whose benefits have run out; families in crisis after the death or disability of a primary wage-earner; those struggling to reintegrate after serving in the military; and others for whom unexpected life events left them hungry and without a safety net. The children we help feed are growing up not just hungry, but in families that may be isolated, maybe with a parent fleeing abuse, or new to this country. 27% of clients are children under the age of 18, and 18% are seniors. We see about 30 new clients each year.

Originally pantries were seen as a help in meeting emergency, short term needs during a crisis situation. But over the years, I have seen that people often need this help to sustain a good food supply on an on-going basis, and we have become a resource which helps folks in the region maintain their self-reliance. Food security is one of the cornerstones of economic self-sufficiency and is the foundation for success in education, work, social development and other life goals. At the pantry, clients are offered a full array of nutritious groceries ranging from packaged foods to frozen meat, fresh produce, bread and dairy. Clients receive a healthy 7-day supply of food for each member of every household that comes each month. The amount of food distributed is based on the size of the household and clients can receive food every week, if needed. Home delivery is available for home-bound residents. Personal care items, household supplies and pet food are often also available. In the summer, extra food is offered to families with school-aged children to fill in for the loss of free or reduced meals provided at school.

The requirements for using the pantry include residency in one of the eligible towns as well as meeting the income eligibility guidelines as prescribed by the United States Department of Agriculture.

The Hilltown Pantry is a beloved institution that is supported by a combination of smaller grants, devoted individual donors, and community-based efforts such as food drives and fundraising events put on by local musicians. The Pantry has been very fortunate over the years in receiving support from the Hilltown Community Development Corporation, which helps cover the operating expenses. For the last three years in January, the Chesterfield Council on Aging has hosted the Hilltown Spectacular, a musical event that is organized by James Kitchen. In 2019, it will take place on Sunday, Jan. 13th at the New Hingham Regional Elementary School and feature many local musical talents as well as the customary international buffet pot luck. Last year, more than twenty local musicians performed. Previously, Hattie Fuller of Cummington organized Hattie’s Follies for many years which benefited the pantry.

Most of the pantry’s food supply comes from the Food Bank of Western Mass in Hatfield, the regional warehouse for food programs across the four western counties. The food selection at the food bank is often at no cost to pantries or for a service charge of nineteen cents per pound, allowing us to leverage a lot more food than at a commercial grocery store. Community support and donations have always been vital to keeping the pantry’s shelves well stocked. Local churches, schools, organizations, businesses, farmers, and individual residents give generously every year. The West Cummington Church holds their fundraisers about four times a year by organizing a night of sharing soup, deserts, and storytelling. A Westhampton egg farmer brings 10 -15 dozen fresh eggs to the pantry every week. Bread Euphoria donates bread weekly. A couple from Cummington uses their expert couponing to purchase food once a month for the Hilltown Pantry. Over the growing season the pantry’s neighbor, Oliver’s Farm Stand and Crabapple Farm in Chesterfield donate fresh produce. Individuals often stop by with just a few items or a trunk full of produce from their home garden. No donation is too small. Last year we distributed over 70,000 pound of food to those community members who needed our services.

The pantry could not function without its very dedicated volunteers, many of whom are there every week. They come because they know the need as they see it in their own communities. Poverty and hunger can often go unnoticed in rural areas, partly because of people living in isolation and because unlike urban areas, the hilltowns do not have pockets of low income housing or other outward signs of financial struggle. Some clients are challenged daily by making choices between buying groceries or paying the rent or electric bill. A single, working woman in her fifties was very conflicted about coming to use the pantry. Like so many, she thought she should be able to make it on her own and that other folks were in greater need. She finally did come in when her hours at work were reduced. She came back the next month and said she was so happy to go home with groceries to put in her cupboards, an experience she had not felt in quite a long time.

I feel very fortunate to both live and work in the hilltowns and to be doing work that helps our residents when they need it.

Founded in 2005 by Sienna Wildfield, Hilltown Families believes in creating resilient and sustainable communities by strengthening a sense of place through methods of community engagement that supports interests and values.

By highlighting the embedded learning found in community-based resources, events, and opportunities, learning becomes inclusive, accessible, and intergenerational while remaining relevant to the learner. When community members are brought together through shared interests, meaningful connections are fostered through a shared history based in community engagement.

Awarded the "Essential Agent of Change Award" by the MDPH's Massachusetts Essentials for Childhood, Hilltown Families is recognized as a leading family strengthening initiative in the region, promoting "positive parenting through the social norm of community social connectedness."

Statement of Solidarity: Hilltown Families acknowledges and stands in solidarity with community groups, service organizations, and individuals working to defend human and civil rights peacefully. Our commitment to sharing community-based educational opportunities that support learning about racism and xenophobia continues during a time of significant social and educational changes. We are committed to doing better and advocating for positive change through facilitated and self-directed learning opportunities. Learn more about the mission of Hilltown Families here and share community-based educational opportunities in Western MA here.

The Hilltown Family Variety Show (HFVS) airs Saturday mornings on Valley Free Radio, 103.3FM WXOJ, Northampton, MA from 9-10am with encores on Sunday from 7-8am. Playlist and podcasts are posted immediately following broadcast. Listen to our archived shows at any time: HFVS Archived Shows.