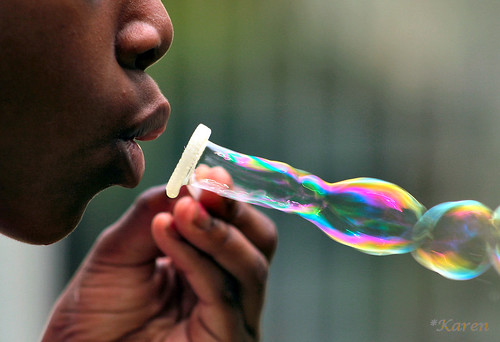 This summer, engage and learn with your kids through bubble blowing!

This week, we have two words for you: Goat Yoga. Need we say more? Well, just in case stretching with Capra aegagrus hircus isn’t your thing, you could explore the phases of the moon, learn how to use regular household items to conduct kitchen science experiments, take part in an artistic interpretation of the game “telephone” with James Taylor’s daughter, Sally, learn about fireflies and run through a field reveling in their luminescence, or enjoy early 4th of July fireworks displays.

Whatever your interests, Western MA has learning opportunities for you. Check out our list of Weekly Suggested Events and let Hilltown Families show you what’s out there and how to make the most of it. We’re the place where you and your family’s interests and values intersect with the adundant resources in Western MA.

SELF DIRECTED LEARNING: GOAT YOGA
Everybody loves yoga and what’s not to love? It’s meditative, relaxing, and great exercise. Well, some mad genius came up with a way to make a great thing even greater: by adding goats! That’s right! Goat yoga is the latest health and wellness craze that has people lining up by the hundreds all around the country. Goat yoga is, well, just what it sounds like. You do yoga with goats. As Oregonian Lainey Morse, the creator of goat yoga, says, goat yoga is not just a gimmick. Snuggling up with adorable baby goats during yoga practice can be profoundly therapeutic for people who struggle with depression, anxiety, or disabilities. Morse says that her goats helped her through many of her health issues and personal struggles over the years: “I would come home every day and spend time with my goats, and it was so therapeutic for me. It’s hard to be sad and depressed when there are baby goats jumping on you.”

SELF-DIRECTED LEARNING: LANDSCAPING
Wondering what other trends have sprouted out of a love for goats? Goatscaping! Read more about this trend in our post, The Garden Plot: An Intro to the Summer Hit of Goatscaping!

SELF-DIRECTED LEARNING: ASTRONOMY
Did you know that astronomers believe that the moon was created not long after the creation of the earth around 4.5 billion years ago when an enormous planetary named Theia collided with Earth? While Theia’s core and much of its mass merged with the earth, the debris that was thrown into orbit coalesced to form our moon!

EVENT: MOON PHASES
Saturday, June 23, 10am
The mysterious moon is full of fascinating secrets and this Saturday, children will have the opportunity to learn all about the moon with a variety of fun activities including using recycled materials to design and build a spacecraft, using Oreo cookies to demonstrate the phases of the moon, and watch a video of the 1969 lunar landing. Westhampton Public Library. Westhampton, MA (FREE)

SELF-DIRECTED LEARNING: KITCHEN SCIENCE
You’d never believe how easy it is to create fascinating and exciting science experiments with common kitchen supplies and ingredients. The famous baking soda volcano experiment is just the tip of the iceberg!

EVENT: KITCHEN SCIENCE
Saturday, June 23, 11am-12pm
If you love science and are interested in learning about how regular household items can be used to demonstrate scientific principles, Kitchen Ka-Boom at the Berkshire Museum this weekend is the event for you! Along with the help of the museum’s very own crazy chemist, kids can learn how to do exciting and surprising (and safe!) experiments with regular household materials. Kitchen Kaboom! is kid-safe, but adults must accompany participating scientists. Berkshire Museum. 39 South Street, Pittsfield, MA (FREE W/MUSEUM ADMISSION)

SELF-DIRECTED LEARNING: PARABLE
Once upon a time, six blind men come upon an elephant standing in the middle of a dusty road. The first man touches the elephant’s tale and proclaims that it must be a rope. The second man touches one of the elephant’s legs and declares it to be a tree. The third man feels the elephant’s ear and says that it’s a fan. Each man is convinced that the part of the animal he can perceive is an accurate depiction of the whole. Eventually, the men begin to fight with each other until finally the king arrives and insists that the men listen to each other and only then are they able to comprehend the totality of what they perceive.

EVENT: PERFORMANCE ART
Saturday, June 23, 11am-1pm
Musician Sally Taylor, daughter of folk music legends James Taylor and Carly Simon, tells the story of the six blind men and the elephant to illustrate the motivation behind her Come to Your Senses project. Come to Your Senses has been described as an artistic version of the game “telephone.” For several years, Taylor has worked with artists from around the world for this project. It may begin, for example, with a musician interpreting a photograph. A dancer may then interpret the song. A painter might then interpret the dance. A perfumer might interpret the painting in the form of a fragrance. And a poet might interpret the perfume. The process continues until each of the five senses are represented, and each artist is given seven days to create their interpretation. During the entire process, the artists’ identities are unknown to each other. Beginning this Saturday, Kidspace and MASS MoCA are joining up to present a selection of works from Taylor’s Come to Your Sensesproject. MASS MoCA. 1040 MASS MoCA Way, North Adams, MA ($)

SELF-DIRECTED LEARNING: HISTORY
“In the mid-ninth century, Chinese chemists, hard at work on an immortality potion, instead invented gunpowder. They soon found that this highly inflammable powder was far from an elixir of life — they put it to use in bombs against Mongol invaders, and the rest was history. Eric Rosado details how gunpowder has caused devastation around the world, despite the incandescent beauty of fireworks.” – The deadly irony of gunpowder by Eric Rosado

EVENT: FIREWORK DISPLAY
Saturday, June 23, 5-11pm
See live firework displays leading up to the 4th of July, starting with Northampton’s annual Family Fourth of July celebration! Join the community for an evening of live music, food from some of the area’s most popular restaurants, health and wellness vendors, games for kids, and of course, fireworks. Fireworks show begins at dark, around 9:30. Look Memorial Park. 300 North Main Street, Florence, MA (FREE)

EVENT: FIREWORK DISPLAY
Friday, June 29, 6-10pm
The City of Holyoke will be celebrating the Fourth of July with their annual fireworks show this Friday! Come early and enjoy live music, delicious food, children’s activities, and local vendors. The fireworks show will begin at dusk. This is a great opportunity for friends and neighbors to come together to celebrate community and all the things that make Holyoke a special place. Holyoke Community College. 303 Homestead Ave, Holyoke, MA (FREE)

SELF-DIRECTED LEARNING: WORLD HISTORY
The 1967 Six-Day War resulted in Israel capturing the West Bank (from Jordan) and the Gaza Strip (from Egypt) and the establishment of the Occupied Territories. The film Censored Voices is based on censored audio recordings made by Israeli soldiers following the war and features contemporary interviews with many of the soldiers, now 50 years later, reflecting on their experiences and the many atrocities they witnessed and were forced to participate in. Among those interviewed is Amos Oz, one of Israel’s leading anti-war authors and activists.

EVENT: FILM SCREENING
Wednesday, June 27, 6:30-8:30pm
To mark the 70th anniversary of the establishment of the Israeli state and the ‘nakba,’ or ‘catastrophe,’ in which hundreds of thousands of Palestinians were forcefully expelled from their own land, the Resistance Film Series of the Northampton Committee to Stop the Wars will be screening Censored Voices this Wednesday. Forbes Library. 20 West Street, Northampton, MA (FREE)

SELF-DIRECTED LEARNING: FILM
It is surprisingly difficult to account for Casablanca’s enduring popularity. Generally considered to be one of, if not the best films of all time, Casablanca seems to delight its die-hard fans endlessly and continues to capture the hearts of first time viewers. But for all its popularity, as novelist and philosopher, Umberto Eco observes, “by any strict critical standards … Casablanca is a very mediocre film.” Indeed, it’s hard not to acknowledge the overwhelmingly melodramatic tone, the stereotyped characters, and the cliched dialogue. However, the film’s apparent faults are precisely what give Casablanca its timelessness and resonance. While stereotypes as a narrative tool are generally regarded as sloppy, great thinkers such as Carl Jung and Joseph Campbell have observed that narrative stereotypes or archetypes possess a universal quality throughout literature, film, and folklore. It is through such devices that we learn about ourselves and our place in the world. To return to Umberto Eco: “Thus Casablanca is not just one film. It is many films, an anthology. Made haphazardly, it probably made itself, if not actually against the will of its authors and actors, then at least beyond their control. And this is the reason it works, in spite of aesthetic theories and theories of filmmaking. For in it there unfolds with almost telluric force the power of Narrative in its natural state, without Art intervening to discipline it … When all the archetypes burst in shamelessly, we reach Homeric depths. Two clichés make us laugh. A hundred clichés move us. For we sense dimly that the clichés are talking among themselves, and celebrating a reunion.” In other words, whether it’s seeing Rick as a representation of Franklin D. Roosevelt or viewing the film as an allegory for the contemporary refugee crisis, Casablanca has that rarest of abilities to speak to any historical or personal moment.

EVENT: STEM
Thursday, June 28, 6pm
Everybody loves to play with bubbles! But have you ever wondered how bubbles are formed, how they stay together, and why they eventually pop? Bubbleology: The Secret World of Bubbles, Revealed, will teach guests the science behind bubbles and demonstrate some of the amazing kinds of art that can be created with bubbles. Adams Free Library. 92 Park Street, Adams, MA (FREE)

SELF-DIRECTED LEARNING: GEOMETRY
Why are bubbles so predictable in their geometry? Find out in this clip from the BBC, featuring “bubbleologist” Tom Noddy:

SELF-DIRECTED LEARNING: JAPANESE LITERATURE
The anonymous 10th-century Japanese text The Gossamer Diaries tells the story of one of the wives of a Kyoto prince. While courtly etiquette and ritual dominate her day to day life, she occasionally escapes to a small temple, where she can enjoy moments of solitude and freedom. During one of these moments, she writes: “The scene was a lovely one. The moon flooded through the trees, while over in the shadow of the mountain great swarms of fireflies wheeled about.” Indeed, fireflies have played an important role in Japanese literature and folklore.

EVENT: CITIZEN SCIENCE
Friday, June 29, 8-9:30pm
From representations of the souls of the dead to symbols of passionate love, fireflies appear in countless songs and poems. Anyone who has seen these magical creatures dancing through the night will not be surprised that cultures around the world have been so entranced by them. Learn all about fireflies and watch them put on their show at this Firefly Watch! Canoe Meadows Wildlife Sanctuary. Pittsfield, MA ($)

SELF-DIRECTED LEARNING: BIOLOGY
Fireflies can not only inspire a love for literature, but also support interests in biochemistry, entomology, and zoology: