Literature in Context: A Community-Based Education Guide to Rebecca Rupp’s After Eli

Literature in Context: A Community-Based Education Guide to Rebecca Rupp’s After Eli 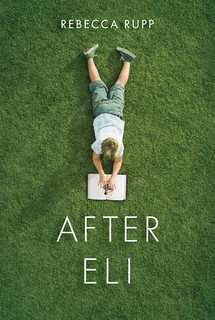 Download the Learning Map, which links this book to local opportunities for community-based learning.

Daniel Anderson’s older brother Eli was killed while serving in the American military in Iraq, and three years after Eli’s death, Daniel is still working out how to feel and how to move forward after such a monumental event. In order to try to find meaning in death – not only Eli’s, but all deaths – Daniel has created a Book of the Dead. His Book of the Dead is really an old binder, but it’s filled with names of the deceased and their causes of death, all of which Daniel processes to find meaning in both their lives and their deaths – with the hope that he will someday be able to find meaning in Eli’s death and the hole that it has left in his life.

Daniel’s Book of the Dead has been years in the making by the time his story begins, right at the kickoff of what turns out to be one of the most transformative summers of Daniel’s life. Whether its all of his studies of creative causes of death or simply the time that has passed, Daniel finds himself suddenly able to open his eyes and truly see the world around him. He makes friends, begins to see the good in others, and even begins to better understand the impact that his brother’s death has had upon the other members of his family. Luckily, Daniel’s summer of awakening isn’t just a moment, it’s a beginning – and by the story’s end, his momentum is leading him away from his Book of the Dead and towards whatever is next.

After Eli brings the reality of military action into a modern context for young readers, who may not yet understand that war and military-related death is not just something of the past. The resources included in the accompanying guide can be used to explore the impact of military service and the memorialization of those who have lost their lives while serving within a community-base context. Relevant resources spotlighted included local ceremonies and parades, local memorials, and data on lives lost from Massachusetts communities in current military action.

A native to Maine, Robin joined Hilltown Families in early 2011 as an intern and remained over the years volunteering as a community-based education correspondent until moving back to Maine in 2016. Robin is a graduate of Antioch University with a masters in education. Her interests within the field of education include policy and all types of nontraditional education. For her undergraduate project at Hampshire College, Robin researched the importance of connecting public schools with their surrounding communities, especially in rural areas. Robin currently lives with her husband, cats, dog, and bunnies in Maine. She is a 3rd grade teacher and the founder of our first affiliate community-based education network, Dirgio Learning.