Off the Mat: Tell it Slant

Off the Mat: Tell it Slant 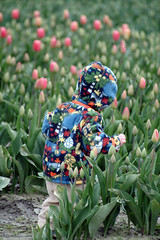 In my 20s, a girlfriend introduced me to May baskets. She purchased old baskets from Goodwill or wove paper ones and gathered small treasures like stickers, maybe candy. Then, early on a weekend morning, the two of us would drive around town snipping blossoms to fill the baskets. We only took flowers from public places (we decided campuses counted as public) in ways that were respectful of the plant’s growth, never too much from one spot. Flower glutton that I am, the back seat soon filled with apple blossoms, rhododendron, plum, pear, and if lucky, a few remaining sprigs of forsythia. Baskets overflowing, we’d drive to our friends’ houses, still very early on a weekend morning, sneak a basket onto the stoop. Ring. And RUN!

Don’t be seen. Don’t get caught. And don’t tell. Even when asked, lie through your teeth. I think I still have friends these 20+ years later who – believing my dishonest denial – still wonder who delivered those baskets.

I don’t remember now how many years we did this, maybe five? More? As the friendship shifted more into our 30s, I stepped out of the tradition.

Until the year my kiddo turned seven.

He was already up early on weekends and that year, May Day was a Sunday. And he was game – the decorating, the trinkets, the early morning flower hunt. The doorbell ringing (if I went, too.) The doughnuts afterwards.

But he balked at the Don’t Tell rule. “Mama, that’s lying!” Lying is lying. Even for fun. Even if nobody gets hurt. He had a point.

Driving between houses, we talked about traditions. How “that’s just the way we do it” can be fun, yet can harm. How we can write our new traditions.  So we crafted a new rule: don’t divulge, but don’t deny. Perhaps it was us who left flowers on Miss Emily’s doorstep last week.

Tell all the truth but tell it slant, Miss Emily famously penned.

In our world where fake news is so prevalent, how do we teach our children to find that fine line? How do we find it ourselves? Pushing 50, I’m only now learning the art of subtlety, the diplomacy of the roundabout truth.

Satya, or truthfulness, serves as the second of yoga philosophy’s ten ethical pillars. Truthfulness is built on the principle of non-harming. At nine, my son has discovered this delicate combo. Honesty is the best policy, so long as it first does no harm. When questioned about afterschool chores, he recently responded this way, “That’s not a lie, Mama. Not even a white one. Do you know about white lies?” he continued, the question rhetorical. “They are when you are not honest on purpose so you don’t hurt someone’s feelings, like if you don’t like their shirt.”

There’s a lot he gets away with – saying he’s washed his hands when filthy fingernails state otherwise. The flashlight under the covers. Child development experts say lying is perfectly normal for kids. Developmentally appropriate. According to research reported recently in the New York Times, lying can even be a sign of intelligence.

If honesty were easy, it wouldn’t need to be a commandment! Fessing up to something you did wrong, especially when it hurt someone else, is one of the hardest things to do. That Times article goes on to say that when we promise to someone else that we will be honest, it is easier to keep that promise.

Our commitment to relationships helps us live our commitments to honesty. Parenting helps me practice. When my son asks a direct question, I keep my commitment to myself and answer honestly, whether about sex or Santa. Though in both cases, my truth may be somewhat slant.

Pain specialist, yoga instructor, and Reiki practitioner Ginny Hamilton teaches simple & proven techniques to release pain & restore energy in the workplace, group classes & private sessions. She has put down roots in South Amherst with her spouse and young son. Daily she’s amazed by the beauty the Pioneer Valley offers, though her allergies beg to differ. In Off the Mat, Ginny explores how yoga’s physical and mindfulness exercises help her parent and how parenting shapes her yoga practice. www.ginnyhamilton.com