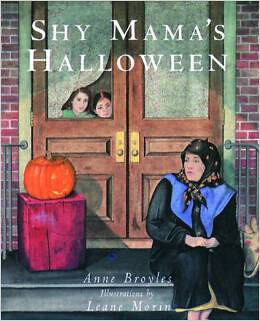 Click on the image for the full, downloadable literature guide in .pdf format.

Shy Mama’s Halloween beautifully illustrates the experience of learning a new and unfamiliar culture. Though the book is set in the past (mid-20th century), the story itself is timeless, capturing the uncertainty, nervousness, and even excitement that accompany new experiences.

In the story, an immigrant family prepares for Halloween – a holiday that they’ve never celebrated before because they’re new to the United States and, in their home country of Russia, Halloween wasn’t part of the culture. While Mama is willing to help her four children prepare their costumes, she’s equally wary of both going door to door in her new neighborhood and a holiday whose theme is centered around sinister characters. It is decided that the children’s father will bring them trick-or-treating, but when he comes home from work sick on the evening of Halloween, it is up to shy Mama to supervise the family’s Halloween outing.

Anya, the oldest of the four children, is well aware of her mother’s uncertainty and helps her to see that Halloween isn’t scary, and neither is their new world. Though she too longs for her former home and has yet to settle in in her new home, Anya recognizes that experiencing the magic and fun of Halloween will help her mother better understand the culture of their new country.

With its immigration theme, Shy Mama’s Halloween matters now more than ever since its publication. At a time when US immigration policy has drawn such controversy, this book serves a tool to teach children empathy. The story compels readers to connect emotionally with the experiences of its characters, and in doing so compels readers to empathize with others who have experienced similar things.

Communities nationwide are home to immigrants who have come to the United States for a variety of reasons; whether they’ve joined us out of necessity or choice, legally or illegally, these new Americans have all experienced major change. Exploring the thoughts, feelings, and actions behind such an experience can help children better understand exactly what it means to be an immigrant.

Use our literature guide to dig deep for learning both within the pages of the book and within your community. Best if read closely with ages 7-10, the book can be accessed and enjoyed by readers of most ages.