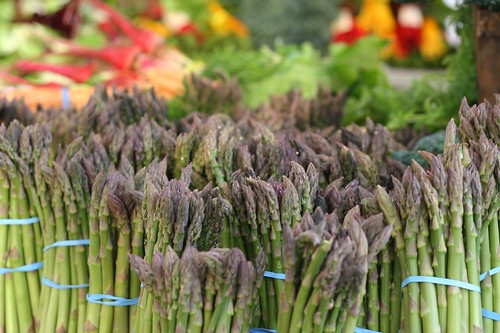 Did you know that Western Massachusetts was once considered the “asparagus capital of the world?”  Our region is known for this late spring harvest that still grows profusely in Western Massachusetts. Many of our local towns honor the asparagus harvest as a traditional part of spring through food celebrations and community meals.

The extremely fertile soil that produces the asparagus of the Connecticut River Valley was created by a layer of sandy loam left by sediment from Lake Hitchcock, a glacial lake that covered the valley 12,000 to 15,000 years ago.  Asparagus production was at its height between the 1930’s and the 1970’s.  This crop was a vital part of the region’s agricultural economy and was even exported abroad due to its quality. Unfortunately in the 1970’s a fungal disease claimed much of the Mary Washington variety of asparagus, the crop which was grown in Western Massachusetts at that time. Since then, other varieties that are disease resistant have been cultivated.

Although it’s no longer the same as it was when it was a booming agricultural product, the asparagus harvest in Western Massachusetts is still abundant.  Local asparagus at the farmers’ markets excites locavores and has even inspired the annual WGBY Asparagus Festival on the Hadley Town Common!  This community festival takes place in the late spring and is a celebration of all things local and agricultural in Western Massachusetts, including asparagus, asparagus ice cream, and asparagus fries!