Birds in your Backyard and Environment

Investigating Nature at Home:
Birds in your Backyard and Environment 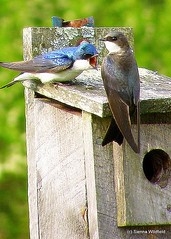 Nesting boxes for any species of bird can bring them to your backyard for observation and inspiration!

There are many local organizations in Western Massachusetts that support species habitat and nesting opportunities for birds. Kestrel Land Trust, based in Amherst, MA, offers a unique volunteer opportunity to be a Kestrel Nest Box Monitor. Nest Box Monitors visit the Kestrel nest boxes regularly to keep track of their use during the breeding season starting in late March. It’s a chance to learn more about kestrels and their nesting patterns, and to observe these beautiful birds of prey locally in Western MA.

What better way to learn more about birds in early spring than in your own backyard! Like poets William Cullen Bryant and Emily Dickinson, you can observe the birds that frequent your backyard feeder and later reflect on their characteristics to write interesting and poetic descriptions that utilize metaphors and similes to convey the bird’s behavior through creative language. If you don’t yet have a bird feeder, building one can be a self-initiated project that may include a variety of skills including math, architecture, woodworking and the decorative arts. You can continue to use your bird feeder throughout the winter months by keeping it stocked for those birds that don’t migrate.  This will help birds have a source of food during the year’s coldest season. As a result, you can continue to watch birds in your backyard and gain a better sense of Western Massachusetts’ bird populations and the species with whom you share your natural surroundings. Perhaps you’ll begin to feel inspired similarly to Bryant and Dickinson!

In 2003, a pair of Peregrine Falcons built a nest on the roof of the University of Massachusetts DuBois Library and, 37 chicks later, the nest is still used by a pair of Peregrine Falcons each year. As a result, UMass Amherst installed a webcam so the public can watch the nest, see when the chicks hatch in April and learn more about Peregrine chicks, nesting behaviors, and fledglings. It’s a rare opportunity to witness wildlife up close! The DuBois Library Falcons have become well-known;  Viewers wait each spring for the webcam’s live stream to be up and running and for the chicks to hatch. You can visit the webcam’s stream at www.library.umass.edu/falcons.

Interested in interacting with birds more directly? How about falconry? Falconry is an ancient form of hunting that utilizes a trained bird of prey to gather food. It dates back to 1300 B.C.E. and has been practiced for centuries all over the world. Although there are records of falconry in the 1600’s in New England, it was not a common practice until the 20th century with Colonel R. L. “Luff” Meredith, who is considered the father of American falconry. In a New Yorker interview from 1938, Meredith said, “a hawk can be trained in six weeks, but it takes three years to make a falconer.” The traditional bird used by falconers in the U.S. is a Peregrine – the same falcon you can watch on the UMass webcam in the spring!