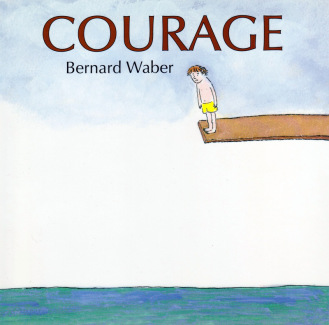 Raising strong, resilient children is a theme in communities perhaps more than ever right now. There are a great many traits that such children must learn to possess before adulthood, and Bernard Waber’s Courage belongs in the library of anyone striving to cultivate strength and resilience in children.

Waber’s sweet, simple story – created late in his career – is a study of courageous acts both great and small. Rather than preaching the importance of courage or spotlighting the immense acts of courage shown by others, the story focuses on everyday courage – the kind that young readers can easily understand, connect to, and replicate in their own lives. Written in the wake of the September 11th attacks, the book serves both as a tool for supporting readers in recognizing their own everyday courage and as a catalyst for future courageous acts.

Told through a series of statements about what courage is, the book is written in a very simple, child-friendly format. Rather than exploring the concept of courage by introducing vocabulary with which to explain it or nearly-unbelievable tales with which to illustrate it, Waber’s simple statements (such as “courage is breaking bad habits”) explore courage as an everyday act while still maintaining its importance and its impact. Many of the statements that make up the story focus on childhood acts of courage, but numerous others shed light on the courageous acts of adults and even animals. The variety of examples used to illustrate courage allows readers to recognize that courage is something that everyone needs eventually, and prompts readers to consider the fact that sometimes people need courage in situations when they themselves might not.