Posted on March 7, 2017 By Hilltown Families 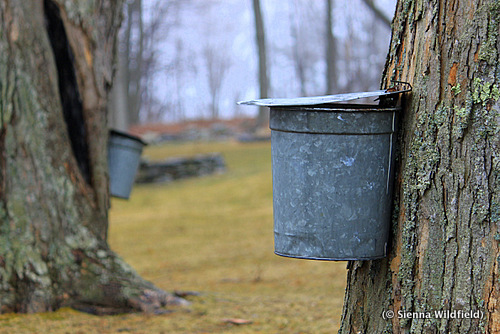 Before the arrival of European settlers, Native Americans were already tapping sugar maples and processing maple sugar in the early 1600’s. Early Native Americans would move their whole families to a location in the woods where there were plenty of sugar maples to tap. They would set up a sugar camp and create V-shaped slashes in the tree as a method to collect the sap. Since they did not yet have metal pots for boiling, the collected sap was placed in a wooden vessel and hot rocks were added to help boil away the water to create a syrupy consistency.

The Native Americans in New England used maple syrup to make grain sugar, cake sugar, and wax sugar. Grain sugar is similar to what we now refer to as brown sugar. Cake sugar was in block form, shaped by pouring the syrup into molds and allowing it to harden. This made it easier to store. Finally, wax sugar is what we know as sugar on snow. It’s the pouring of maple syrup heated to high temperatures on the snow to create a taffy-like consistency to enjoy.

In the 1790’s, European settlers decided to drill a small hole into the trunk, rather than create V-shaped slashes. This method is still used today for sap collection. By drilling a hole, the sap was allowed to drip into a vessel for collection to be boiled down into syrup in large metal pots. The syrup was then poured into molds to create sugar blocks, as maple sugar was historically more common than maple syrup. The maple sugar produced from sugaring became an important commodity for New England colonists as it was sold and traded.