Valentine’s Day Through the Lens of Art & History

Posted on February 7, 2017 By Hilltown Families

The Art, History & Paper of Valentines 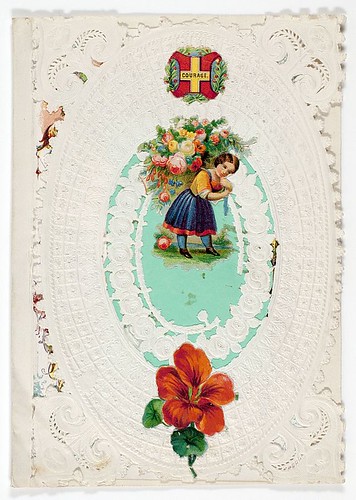 The American valentine industry was started during the mid-19th century by Esther Howland, a Mt. Holyoke graduate and Worcester native. Often called “The Mother of the Valentine,” Howland was inspired by the beautiful, ornate valentines imported from England and suspected that there might be a market for them in the United States, as well. Through her father’s paper company, she sold her first valentines in 1848 and within a few years was able to begin her own business, the New England Valentine Company.

Howland’s valentines featured lacy, cut paper with ornate and decorative images. At Mt. Holyoke College’s Archives and Special Collections there are many examples of Howland’s valentines with designs heavily influenced by Victorian style. By the 1860’s, Esther was selling $100,000 worth of valentines a year.  (That’s over 2 million dollars today!)

In honor of this Mt. Holyoke alumna’s success and contribution to the history of paper goods and Valentine’s Day, the college’s Archives and Special Collections displays a student-curated exhibit case of valentines in the Library’s courtyard. Curious to see some of the collection’s valentines?  Take a look online at the Pinterest board, From MHC With Love.

Esther relied on her father’s local paper company to start the business.  In the mid-19th century these types of mills were more common. Which paper mill is the oldest?  That would be Crane & Co. in Dalton, MA!

More than 200 years ago a patriot named Stephen Crane opened up a paper mill to  print patriotic newspapers and colonial currency in support of the colonists’ rebellion  against England. In 1799, Crane’s son chose a new location for the mill along the Housatonic River in Dalton and Crane & Co stationery was born. Crane & Co. stationery still prints on 100% cotton and is still in Dalton, MA.  They also print our American currency! The Crane Paper Museum is open to the public June-October.   For more information about the museum visit www.crane.com.