Literary Guide for Robert Shetterly’s “Americans Who Tell the Truth”

Literary Guide for Robert Shetterly’s “Americans Who Tell the Truth” 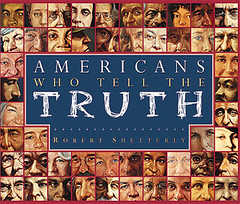 Download the Literary Guide for Robert Shetterly’s Americans Who Tell the Truth.

The product of an ongoing art project promoting civic engagement and community involvement, Robert Shetterly’s Americans Who Tell the Truth is a book filled with biographical portraits, with information presented both visually and within the text. The project, from which the book’s contents are drawn, pairs beautifully painted images with poignant quotes highlighting the historical and cultural significance of each person featured.

Shetterly, a children’s book illustrator from Maine, has been touring Americans Who Tell the Truth as an exhibit since 2003, and the project has continued to grow over the years. Centered around Shetterly’s belief in the importance of dissent in democracy, the artist’s goal was to share the themes of community sustainability, obligation to citizenship, and the importance of truth in politics and the media.

Whether actively used to teach students about the importance of citizenship or shared with children as a more casual topic of interest, Americans Who Tell the Truth spotlights a powerful project with lots of educational potential. Seeing lesser-known activists, advocates, and other change-makers highlighted alongside infamous greats can help children to recognize the power of their own voice, knowledge, and experience. They too, they will learn, can be an important force of change.

As the book’s content delves into themes that are most accessible to older readers, it is best used with older audiences – tweens, teens, and adults. Younger readers can still glean information from the portraits, and can certainly be taught the basics about many of the people featured in the book, but the resources included in this guide are designed for much older readers. Using our accompanying literature guide, families and educators can add depth and breadth to the learning that takes place upon exploring this fantastic book.