The Ripple: The Importance of Ice 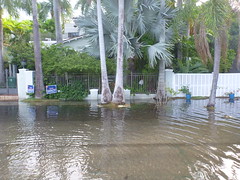 The Importance of Ice

Every time there’s a big storm in Miami, the ocean fountains up through the storm-drains and swamps the streets.

This happens regularly now, not just in Florida but all the way to Virginia.

The earth has warmed and is warming.

If you wonder why our political leaders, especially in “red states,” are unwilling to face this fact, the reason is very simple. Our present economy cannot function without warming the earth. Our political leaders are actually dedicated to “saving” and “growing” this economy. The United States has exported this economy for decades with promises to foreign nations that if they join us, they will experience democracy and freedom. At the moment, we are stuck in the paradox of wanting to grow the economy while wanting to stop global warming.

The entire career of Paul Krugman, the esteemed Noble Prize winning economist and Princeton professor who writes for the New York Times, exemplifies how this paradox arrests our actions. On one hand, he expresses the truth that “the buildup of greenhouse gases is a much bigger deal than the accumulation of low-interest debt.” But he also wonders how, in the recent election, “more than 40 percent of young voters believe[d] that there [was] no difference between the candidates on these issues.” The reason he wonders, is that he never considered Bernie Sanders or Jill Stein to be legitimate presidential candidates. When we look at the issue of ending fossil fuel use, they did not run on Obama’s “all of the above” energy policy—a bipartisan policy the Republicans publicly embrace.

Moreover, unlike Sanders and Stein, Obama, Clinton, and Trump all support the Dakota Access Pipeline.

Krugman doesn’t understand how young voters saw Clinton’s and Trump’s “all of the above” energy policies as being the same. He wants action taken to prevent more global warming, yet his own “all of the above” energy policy prevents that from happening. The paradox of wanting to grow the present economy while also wanting to stop global warming arrests his, and our, actions.

The global warming crisis presents the greatest threat to life on earth in the last 10,000 years, and yet our leaders and large populations are paralyzed by present patterns of economic behavior—and that is why you must get yourself, your family, and your friends to the river.

It’s freezing out, and one might wonder why I’d be urging you to go and be by a river. The ice is forming, that’s why. 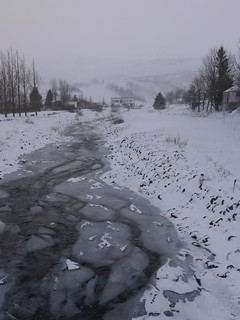 Look at it and love it. It holds the world in place more than our economy ever has, or will.

It is also very beautiful—and it is a mineral. Contemplating water as mineral is a way of understanding water as an environmental philosopher understands it. Water is wise, and there is much we can, and need to, learn from it. It is not what it appears to be. It is more than we have ever been taught.

To adapt, to thrive in our new environmental conditions, we have to “think outside.” So, in this season of cabin fever, let us embrace the polar vortex and thank it out loud for making ice and trying to help us, and our friends in Miami, while we are unable to help ourselves.

← Learning Landscapes: Embracing Change in the Light of Solstice
First Day Hikes for the New Year →