Literature Guide for Leo Lionni’s “Tillie and the Wall”

Posted on December 12, 2016 By Hilltown Families

Literature Guide for Leo Lionni’s Tillie and the Wall 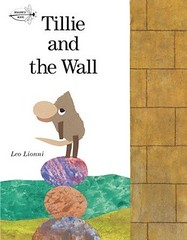 Download the full guide to Tillie and the Wall.

One of beloved author and illustrator Leo Lionni’s lesser-known works, Tillie and the Wall tells a fantastically symbolic tale of a young mouse and the power of curiosity. Told through somewhat simple text, the story is accessible to young readers yet includes deep symbolism that older readers can engage with.

Lionni’s classic style of illustration (a mixture of cut paper, collage, and traditional hand-drawn images) echoes both the story’s simplicity and below-the-surface complexity, and the book’s images add additional layers to the embedded symbolism.

In the story, a young mouse named Tillie lives alongside a small community of mice in a habitat that is bordered on one side by an enormous wall. The wall is so large that none of the mice can see over it or climb it, and none of them can seem to find its end. Long ago, the mice wondered what was on the other side of the wall. However, once they discovered that they couldn’t find out, they stopped wondering. The mice learned to accept the wall as part of their surroundings, and though they couldn’t explain it, they felt no need to discuss it. All of them that is, except for Tillie.

Being a young mouse, Tillie is fascinated with the wall – her fascination driven by curiosity. She imagines all manner of strange plants and beasts inhabiting the lands on the other side of the wall, and even rallies a group of young mice to re-attempt the search to get around the wall. The youngsters try climbing the wall and ramming the wall with a nail (remember, they are mice after all!), both to no avail. Finally, Tillie experiences a stroke of genius. Earthworms, she observes a tunnel beneath the earth’s surface. Couldn’t she, then, tunnel underneath the wall and discover the other side?

Tille digs and digs, and eventually finds herself on the other side. Much to her surprise, the inhabitants of the other side are neither fantastic beasts nor exotic plants: they’re mice, too! The two mouse communities are overjoyed at Tillie’s discovery and, after much celebration, the tunnel is left open, allowing the mice to move freely from one side to another, joining their two communities together.

Families, teachers, and educators of all kinds can use our accompanying literature guide to support readers – particularly older ones – in deepening their understanding of the story and linking it to the world around them. Through creative use of critical thinking questions, a mini-lesson centered around discovering commonalities with those we differ from, and a handful of extension activities linked to teamwork, communication, art, and world cultures, readers can make a read of Tillie and the Wall into a rich and in-depth study of children’s literature!