Posted on November 8, 2016 By Hilltown Families 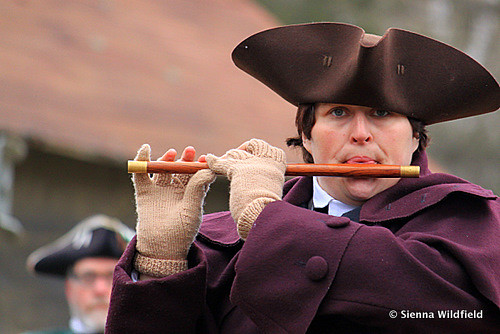 The Old Guard Fife and Drum Corps in the armed forces is a part of the 3rd U.S. Infantry Regiment (The Old Guard). It is stationed at Fort Myer, VA. This unique military unit performs in uniforms based on those worn by the musicians of General George Washington’s Continental Army.  Uniforms from this time included black tricorn hats, white wigs, waistcoats, colonial coveralls, and distinct red regimental coats.

This interesting regiment recalls New England’s historic past through its music. As mentioned earlier, our state and region were a central part of the United States’ early formation. Massachusetts was one of the original colonies and many of the patriots that participated in the Revolutionary War were from Massachusetts. The music that the United States Army Old Guard Fife and Drum Corps plays is the same music that once inspired the patriots serving in the Revolutionary War. As you participate in Veterans Day ceremonies, take a moment to listen to this early music and remember those who served this nation.

Learn more about this interesting regiment at www.fifeanddrum.army.mil.

Excerpt from Learning Ahead: Cultural Itinerary for Western Massachusetts (Seasons: Nov/Dec), a downloadable bimonthly publication produced by Hilltown Families that sheds light on embedded learning opportunities found in cultural resources that exist within the geography, history, and cultural traditions of Western Massachusetts.