Rediscovering the Past: Local History & Hauntings

Posted on October 25, 2016 By Hilltown Families 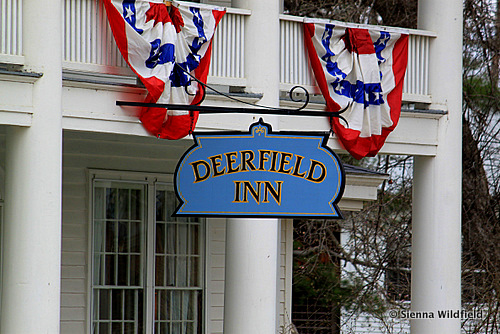 Hauntings at the Deerfield Inn? Some claim to have seen a ghost of Cora Carlisle, the Inn’s owner from the 1930’s. Others say to have witnessed a ghost known as Hershel in Room 148.

Hauntings and history go together because ghosts are often traditionally seen as apparitions that once lived and therefore represent a past not entirely forgotten because it crosses realms and lingers in the present and future.

Many historic tales of hauntings are passed down through oral histories of places.  Through word of mouth, legends and ghost stories are passed down from generation to generation and become a part of a town or city’s character. Curious to explore some of Western Massachusetts’ haunted places? Head out and visit some of these intriguing places:

Deerfield Inn at Historic in Deerfield
Some claim to have seen a ghost of Cora Carlisle, the Inn’s owner from the 1930’s. Others say to have witnessed a ghost known as Hershel in Room 148.

Theodores’ Tavern in Springfield
Investigators from the SciFi Channel’s Ghost Hunters came to Theodores’ Tavern to see whether the historic building was haunted or not. Many say they have heard whispering, balls rolling, footsteps and apparitions!

Smith College’s Sessions House in Northampton
There’s a Revolutionary War legend that Lucy Hunt died of a broken heart after being separated from the man she loved, General Burgoyne. The Sessions House was the 18th century home of Lucy’s family. The two lovers used to secretly escape to a hidden staircase in the house to spend time together.  It is said that Lucy Hunt still haunts that staircase today!

The Mount in Lenox
Once home to American author, Edith Wharton (1862-1937), this historic house museum hosts ongoing ghosts tours through the “most haunted parts” of the estate. Claiming to be “haunted by formless horrors” in her earlier years, Wharton wrote several ghost stories throughout her career.  Firsthand accounts have reported reported paranormal activity and even film and audio have recorded unexplained sounds and visual activity.

Houghton Mansion in North Adams
According to their web site, “The Houghton Mansion was home to North Adams, Massachusetts first mayor Albert Charles Houghton and his family. In the spring of 1914, the Houghton’s invested in their first car and sent their long-time chauffeur, John Widders, to learn to drive it. On August 1st of that year, Mr. Houghton and his daughter, Mary went to nearby Bennington, VT for a pleasure drive with Mr. Widders at the helm.  This is how it all began. This unfortunate accident and the many deaths and incidents which occurred shortly thereafter are the exact reasons why the Houghton Mansion is seen as one of the most haunted locations in the United States.”