Posted on October 18, 2016 By Hilltown Families 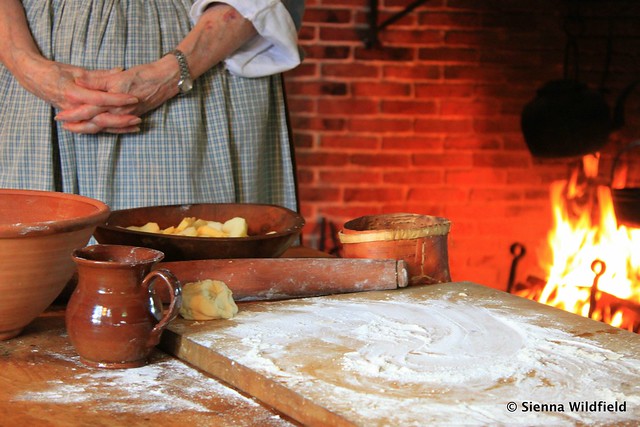 While Colonial Americans did not celebrate Halloween, their interest in pumpkins was food-based rather than a holiday decoration. Support a farm to table interest by incorporating fresh pumpkin into your culinary adventures. Remember Lydia Maria Child from September’s apple itinerary and her recipe for apple pie? Pumpkin was also considered a common pie in 19th century New England. Her recipe from 1832 is as follows:

“For common family pumpkin pies, three eggs do very well to a quart of milk.  Stew your pumpkin, and strain it through sieve, or colander.  Take out the seeds and pare the pumpkin, or squash, before you stew it; but do not scrape the inside; the part nearest the seed is the sweetest part of the squash.  Stir in the stewed pumpkin, till it is as thick as you can stir it round rapidly and easily.  If you want to make your pie richer, make it thinner, and add another egg.  One egg to a quart of milk makes very decent pies.  Sweeten it to your taste, and molasses or sugar; some pumpkins require more sweetening than others.  Two tea-spoonfuls of salt; two great spoonfuls of sifted cinnamon, one great spoonful of ginger.  Ginger will answer very well alone  you use enough of it.  The outside of a lemon grated in is nice.  The more eggs, the better the pie; some put an egg to a gill of milk.  This should bake from forty to fifty minutes, and even ten minutes longer, if very deep.”  – Lydia Maria Child, The American Frugal Housewife (1832)

Experience life in an early New England kitchen at Historic Deerfield during an open hearth cooking demonstration. Learn about traditional fall harvest foods, including pumpkins and apples, and discover their culinary importance during the Colonial era.  During the fall and winter months, cooking demonstrations with museum interpreters dressed in period clothing allow visitors of all ages to see what life was like in Colonial New England and how food (including pies!) were cooked on an open hearth.

The beauty of baking a pumpkin pie is that it uses so many hearty ingredients produced on the farm.  Baking pies offer lessons in understanding self-reliance and our region’s agricultural heritage.  Eggs, butter, flour, molasses, pumpkins – all of these ingredients are produced locally and made by hand.  Baking pumpkin pie from scratch engages the past through the present moment while experiencing an early American baking tradition similar to the way it was done back in the 1800’s.

Who was Lydia Maria Child? Known as one of American’s first literary women, her contributions extend beyond the culinary arts. The National Women’s History Museum website has reprinted a brief biography originally found in the American Women’s History: An A to Z of People, Organizations, Issues, and Events by Doris Weatherford and is an excellent read for anyone interested in women studies, Colonial history and literature.

← Think About This: Pumpkins and a Sense of Place
Community-Based Education Resource: Pumpkin Patches →