Posted on August 9, 2016 By Hilltown Families

This month’s nature table is written by environmental educator Phoebe Gelbard, a recent graduate of Northampton High School and a freshman at the University of Massachusetts.

This summer, whether you are swimming in a river, admiring a striking sunset, or smelling a flower, you can observe recurring shapes and patterns in the landscape around you. Change is a constant, and as each month fades into the next, previous patterns fade and new ones begin to appear. While we are all familiar with certain designs that are found in our backyards, such as the heart-shaped leaves of clover and the spiral of a snail’s shell, other patterns that involve multidimensional interconnectedness are more difficult to recognize. These patterns, known as fractals, are described as expanding or evolving symmetry because of the way that they repeat themselves when taking both a closer look and when stepping back. 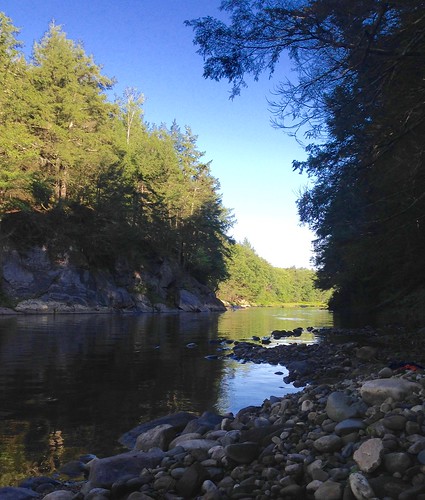 One of the most common fractals growing in the forests and fields around us is the fern. While there are multiple varieties, many of them have three observable degrees of repetition. Going from large-scale to small-scale, start with a single fern frond (picked at the base of the stem). The frond resembles an evergreen tree made up of several boughs. Now pick off one of these bough-like leaflets (pinnas) where it meets the main stem and you will be left with a smaller version of the original frond. Finally, pull a single subleaflet (pinnule) from the pinna, and you are left with the smallest copy of the frond. From one large frond, there are now three similar shapes on three different orders of magnitude.

Another accessible (and traversable) example of a fractal is a watershed. While cross-country trekking, we come across trickling, spring-fed rivulets that cascade into brooks and streams. These small tributaries feed the branches of rivers which then travel into the main flow of water that runs through a valley. Just as twigs make up limbs that connect to tree trunks, watersheds branch out into innumerable smaller variations of the original.

While developing an awareness of these patterns, one gains an understanding of their implications. Through walking the watersheds in which we live, we begin to realize that rivers are roads – complex systems of naturally-occurring infrastructure that are vital to the myriad of aquatic and reptilian species and the predators that rely on them.

While not all patterns contain fractal-like characteristics, there is often more than meets the eye when considering the bigger picture of each leaf and ripple. Observe the concentric rings indicating tree growth: how far apart is each ring from the next? What does this tell us about past growing conditions, both human-induced and naturally-occurring? In which ways do we alter the local landscape and the course of the global climate?

The next time you step outside, take a moment to look for the patterns that surround you while considering the larger pictures of which you are a part; the more mindful and conscientious we are of our surroundings, the more we are drawn to protecting them.

“‘Have you also learned that secret from the river; that there is no such thing as time?’ That the river is everywhere at the same time, at the source and at the mouth, at the waterfall, at the ferry, at the current, in the ocean and in the mountains, everywhere and that the present only exists for it, not the shadow of the past nor the shadow of the future.”
– Hermann Hesse, Siddhartha

Books to support the study of repeating patterns in nature include:

For further resources for exploring Fibonacci and other nature patterns, check out Fibonacci Sequence and Golden Ratio Drive Nature-Based Education.

← Learning Landscapes: Blending Nature with Self through Animal Allies
In Appreciation: In Praise of Imperfection →