Explore Western MA through the lens of visual art! Featured here are August art openings, closings & call for art at galleries, museums and public meeting places across the region, including: Norman Rockwell Museum in Stockbridge, Williams College Museum of Art in Williamstown, Mill Arts Project in Easthampton, Smith College Museum of Art in Northampton, Berkshire Museum in Pittsfield, The Eric Carle Museum in Amherst, Schantz Galleries in Stockbridge, and the Michele and Donald D’Amour Museum of Fine Art in Springfield.

This online art exhibition presents Norman Rockwell’s paintings, rarely seen studies, reference photos, and correspondence relating to presidential campaigns during the 1950s and 1960s, including the tumultuous election year of 1968. From rarely seen photographs with Presidents Dwight D. Eisenhower, Lyndon B. Johnson, Richard Nixon, and Ronald Reagan; to distinguished paintings of President John F. Kennedy and his brother/presidential candidate Robert Kennedy, Presidential Elections Illustrated offers an intimate look at our nation’s highest office through the eyes of America’s favorite illustrator. Drawings, paintings and photographs from the Museum’s permanent collection are featured in the exhibition. A highlight of the exhibition are paintings created by Norman Rockwell for Look magazine in 1968, covering the turbulent presidential elections that year. Rockwell once remarked: “I am no politician and certainly no statesman. But I have painted thousands of people and should by now be a judge of what their faces say about what they are.” This partnership is part of the Google Arts & Culture’s American Democracy collection, which brings together over 60 exhibits and 2500+ artifacts from 44 institutions dedicated to the preservation of U.S. political history and the practice of American democracy. This virtual art exhibit is a unique integration of art and political whose format offers broad public access to collections and related content to audiences around the globe. (FREE/ONLINE)

This unique gallery displays works of art selected by Williams faculty from across disciplines and makes visible how works of art are used in courses across the curriculum. Object Lab at Williams College Museum of Art changes each semester and highlights how professors deeply embed art into their teachings. This exhibit also allows viewer to truly appreciate the impact of visual learning. The exhibit is on display from January 22, 2016 through August 7, 2016 at Williams College Museum of Art. 15 Lawrence Hall Drive, Williamstown, MA. (FREE) 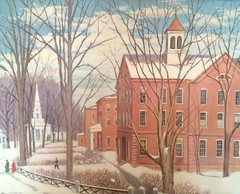 Albert Kiesling was born in Clinton, MA. As a young adult he moved to Easthampton to work at the textile mill, Hampton Co. as a quiller. He learned to paint through a friendship with Oscar F. Adler, a well-known American Expressionist painter. Adler’s work will also be represented in the exhibit. Kiesling’s favorite subjects were rural landscapes with horses or cows and local waterways. He also painted many historic buildings in the area, documenting some that are long lost to history, such as the original Williston Campus on Main Street, the old train depot, and Emily Williston Memorial Library, all in Easthampton. The artist did not own a car and walked long distances carrying his easel, palette and canvases. He has obtained folklore status from older locals whose childhood memories include Kiesling painting at some of his favorite sites in Easthampton, Southampton, and Westhampton. Albert G. Kiesling: A Visual History of Easthampton at The Mill Arts Project in Eastworks offers viewers an intimate look into our local history through nostalgia, art, and reflection. The exhibit will be on view through August 13, 2016 at The Mill Arts Project in Eastworks. 413-529-1425. 116 Pleasant Street, Room #137. Easthampton, MA. (FREE)

This exhibit features works by a diverse group of both emerging and well-established photographers from Cambodia, India, Myanmar, Nepal, Pakistan and Vietnam. Although cultural specificity is important to the meanings of their works, each of these artists is also concerned with the complexities of individual and group identity, within and outside of nationality. The artists address such challenging themes as the daily lives of individuals in minority groups, the hybrid experiences of diaspora communities, the defining constrictions of social class, the evolving cultural tensions within and between nations, and the role of art as an indicator of cultural identity. This exhibition does not—and could not—attempt to be a comprehensive survey of photographic work from South and Southeast Asia. Rather, Dislocation | Negotiating Identity: Contemporary Photographs from South and Southeast Asia at the Smith College Museum of Art is a selection of subtle, thought-provoking works by a group of individual artists who creatively address complex and changing social realities. Using a variety of artistic strategies, they have produced a highly evocative and powerful set of works – personal and political, visually engaging, very contemporary yet rooted in complex histories. The exhibition offers viewers a rare opportunity to think about identity in national, trans-national, communal and individual terms, through meaningful artistic encounters. Admission is free to the public on the second Friday of each month. Free passes are also available at Forbes Library in Northampton with library card. The exhibit will be on display now through August 14, 2016 at the Smith College Museum of Art. 413-585-2760. 20 Elm Street, Northampton, MA. (<$)

The BerkshireNow gallery space will feature the work of award-winning filmmaker and artist Daniel Brody. The centerpiece of BerkshireNow: Daniel Brody at the Berkshire Museum is a 9-minute looping video entitled “Game On/Game Over,” which features a playful but thought-provoking mashup of animation and live action. Viewers will witness a video that is both comical and foreboding, as a hooded figure walks in the winter woods, and a room floats over snowy fields and sinks into black waters. The meaning of these clips is left to the spectator’s interpretation. The video will be complemented by a collection of recent abstract drawings and paintings that share a similar playful and nervous energy. This exhibit highlights video animation as a distinct form of art, while engaging viewers through the evocation of both thought and emotion. The exhibit will be on view from June 3, 2016 through August 21, 2016 at the Berkshire Museum. 413-443.7171. 39 South Street (Route 7), Pittsfield, MA. (FREE W/ADMISSION)

Not Theories but Revelations: The Art and Science of Abbott Handerson Thayer
Williams College Museum of Art
On View Through August 21, 2016

Abbott Handerson Thayer is a renowned twentieth century painter who was at the center of a raging debate around Darwin’s theories of evolution. He is best known for his paintings of ethereal angels, landscapes, and delicate flowers. As much a scientist as an artist, Thayer’s study of the visual world expressed itself in articles published in major scientific journals, an epistolary debate with Theodore Roosevelt, and in the development of the first prototype of military camouflage. Not Theories but Revelations: The Art and Science of Abbott Handerson Thayer at Williams College Museum of Art is the first exhibition to address Thayer’s artistic practice as part of his broader investigation of animal and human concealment. Viewers will experience the merging of science and art, while increasing their understanding of how the artist’s original, controversial, and radical views held historic influence. On display from March 11, 2016 through August 21, 2016 at Williams College Museum of Art. 413-597-2429. 15 Lawrence Hall Drive, Williamstown, MA. (FREE)

The Art of Eric Carle: Hide and Seek
The Eric Carle Museum
On View Through August 28, 2016 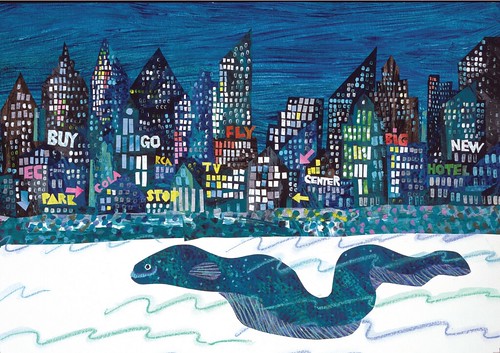 Carle has made many pieces of unforgettable art during a 50-year career that includes more than 70 books. Unbeknownst to most readers, however, Carle has left behind a trail of “Easter eggs” in his illustrations, and in doing so has created a subtext of secret allusions. “Easter eggs” is a term that refers to the small, unexpected items that artists intentionally incorporate into their work, usually as a way to honor someone or to further engage their fans. Carle’s art playfully references his family and friends, often hiding the letters “C” and “R” in his images, denoting the first letters of his children’s names. He also camouflages the names of his friends into some of the images. The Art of Eric Carle: Hide and Seek at the Eric Carle Museum presents 27 works of art from 17 books, as well as previously unseen original art from the Museum’s collection. This exhibition offers an intimate glimpse into the artist’s personal story. It also aims to entice viewers to take a closer look at the artist’s work to uncover his hidden references. The exhibition is on display from April 6, 2016 through August 28, 2016 at The Eric Carle Museum. 413-658-1100. 125 West Bay Road, Amherst, MA. (FREE W/ADMISSION)

African Art Against the State
Williams College Museum of Art
On View Through August 28, 2016

This cultural exhibit highlights the long and extraordinary history of activism, intervention, and resistance that has characterized a great deal of African art-making from prehistory to the present. African Art Against the State at Williams College Museum of Art will utilize a select group of objects from various traditions and artistic moments to spotlight how art has been used as a mechanism of mediation across both space and time, while giving teeth to the adage that sometimes images can speak louder than words. The exhibition aims to underscore how artists have used expressive culture in Africa to produce advocacy and agency for disenfranchised and marginalized groups and communities.The exhibit is on display from January 29, 2016 through August 28, 2016 at Williams College Museum of Art. 15 Lawrence Hall Drive, Williamstown, MA. (FREE)

The Art of Dale Chihuly
Schantz Galleries
On View Through August 28, 2016 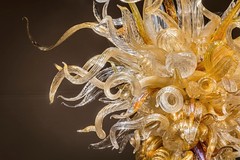 The Art of Dale Chihuly at Schantz Galleries features work by renowned glass artist Dale Chihuly. With a background in interior design and architecture, Chihuly has always been interested in space and light.Working within the architecture of the gallery, he presents several of his well-known series along with a few large-scale installations. The centerpiece of the gallery is Sunrise Topaz Chandelier, a two-tiered chandelier consisting of approximately 430 amber, gold, and clear elements. An American sculptor, Chihuly has mastered the alluring, translucent, and transparent qualities of glass, ice, water, and neon, to create works of art that transform the viewer experience. He is globally renowned for his ambitious, site-specific architectural installations in public spaces and for his work in more than 250 museum collections. In addition to the blown-glass sculptures, Chihuly has included sixteen of his works on paper. As Nathan Kernan has stated in an essay, “Drawing into Space: Chihuly Drawing Revisited”, “Chihuly’s drawings over the past thirty-five years constitute a parallel visual world as compelling and original as that of his amazing sculptures.” The artist has always used drawing as a form of conveying his concepts and ideas for his sculptures, and one can certainly experience his expressive energy and love of color. Chihuly notes, “You can more directly sense my energy in my drawings than in any other way, perhaps.” Chihuly is famous for his ambitious architectural installations in notable cities, museums, and gardens around the world. This display provides visitors with a more intimate setting in which to enjoy the pieces, bringing the work of a world-renowned artist directly into our local community. The exhibit will be on view from July 8, 2016 through August 28, 2016 at the Schantz Galleries. 413-298-3044. 3 Elm Street, Stockbridge, MA. (FREE) 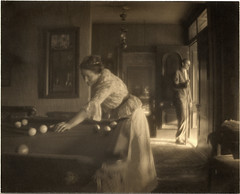 This display celebrates the intrepid intrepid group of photographers who seceded from the Camera Club of New York in 1902 in an effort to establish photography as a full-fledged fine art. Drawn from a private collection, the 73 works in this exhibit include classic examples of Pictorialism by the most ambitious artist-photographers, including Alfred Stieglitz, Heinrich Kühn, Gertrude Käsebier, Edward Steichen, and Clarence White. Photo-Secession: Painterly Masterworks of Turn-of-the-Century Photography at the Michele and Donald D’Amour Museum of Fine Art offers viewers an opportunity to see how these pioneers helped to elevate photography into the distinct and appreciated art form it is today. The exhibit will be on display from April 12, 2016 through August 28, 2016 at the Michele and Donald D’Amour Museum of Fine Art. 413-263-6800. 21 Edwards Street, Springfield, MA. (FREE W/MUSEUM ADMISSION)