Literary Guide for Molly Bang’s “Nobody Particular: One Woman’s Fight to Save the Bays”

Literary Guide for Molly Bang’s Nobody Particular: One Woman’s Fight to Save the Bays 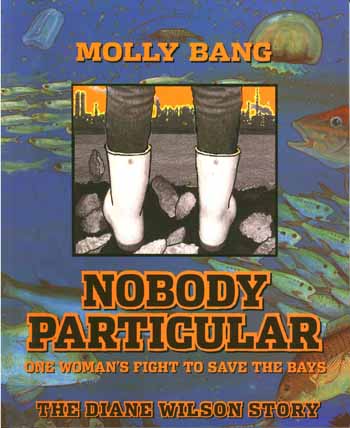 Download Literary Guide for Nobody Particular: One Woman’s Fight to Save the Bays.

Diane Wilson was always a strong woman. She made a living as a shrimper while raising five children, and relied on her own resilience and pure grit to raise her family. In 1989, shrimp became scarce in the bays of her hometown in Calhoun County, Texas. Diane worried about the size of her catch, and the future of the shrimp population in Texas’ bays. What would happen to the industry if the shrimp died out? How would she support her family?

Diane’s concerns turned into action when she learned about a connection between the lack of shrimp and the monstrous plastics manufacturing plants that dotted the coastline of her home county. At the time (1989), her county was responsible for over half of the state’s pollution – and it wasn’t just killing the shrimp. Diane saw the effects that the plants had all around her – in the local landscape and within the human community, too. And much to her horror, the companies causing environmental destruction and human health problems were not only being allowed to do so, but they were also about to be allowed to expand without any consideration of the environmental impact that expansion would have.

Reborn as an environmental activist, Diane channeled her anger, frustration, and desire for justice into meaningful action. She partnered with an environmental lawyer for legal support, and through a hunger strike, picketing, and acts of civil disobedience, Diane brought considerable attention to her cause. The manufacturing companies paid attention, and so did her community. Even though her purpose was controversial (as the plants offered thousands of jobs to families living in an area riddled with poverty), Diane persevered. Her activism drew vast amounts of negative attention to her and took a significant toll on her personal life. However, her efforts eventually paid off: her actions brought lots of attention to the environmental impact of plastics manufacturing, and lead to fines for many of the companies in question. She didn’t fix everything, but for one woman – self-described as “nobody in particular” – she sure accomplished a lot.

The story told through a graphic novel format in Molly Bang’s Nobody Particular: One Woman’s Fight to Save the Bays, details the beginning of Diane’s career as an activist. Additionally, the book teaches readers about the fragile bay ecosystems that dot Texas’ coast. This blend of narrative and informational writing makes the book incredibly educational and allows it to connect to studies of a wide variety of topics. While the story’s themes and reading level make it accessible to readers as young as 10, it is best for teen readers.

By utilizing critical thinking questions, extension activities, and an outline for a mini-lesson derived from the story, families, and educators can transform their experience of reading Nobody Particular. Critical discussion of the events and themes presented can help to add depth to readers’ understanding of the story, and critical analysis and research sparked by lessons and activities can help readers to build a schema to help them understand environmental policy and activism.