Crossings: To My Son on Your College Graduation 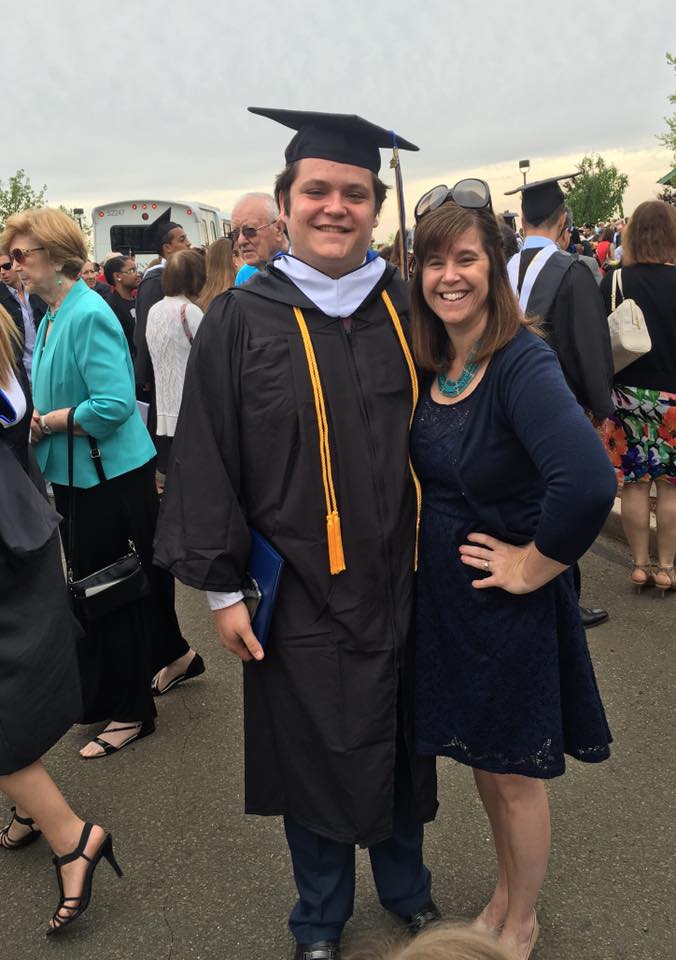 “Mommy, why did parents cry when their children crossed the stage at my brother’s college graduation? Why did you cry?”

“That’s a good question, my darling. It is difficult to put that emotion into words, but I will try.

For over two decades your brother has been crossing and I have lovingly watched him.

When he was one, he took his first steps crossing the living room headed right for my outstretched and safe arms.

The first time he crossed a busy Manhattan Street was in a stroller that I pushed. He hated it there and threw up on the side of a building and so we crossed right back over that same street to our awaiting car to take him home.

When he was five, his little body carrying a large backpack crossed the school’s threshold after his first day of kindergarten. He smiled, (he has such a sweet one) and I whispered, “I missed you!”

Your big brother would cross the hot sand on tippy toes at the beach and squeal with delight when your dad would throw him high into air over ocean waves. He was always happiest at the beach that brother of yours, just like your mama.

As he got older, I noticed, as all moms do, that his crossings often took him away from me or toward something else.

Like, the first time he hit a grand slam in baseball, I swear he crossed home plate three inches taller. Oh, he was beaming. The pride just oozed from him. He celebrated by high-fiving his teammates, but rolled his eyes in sheer embarrassment at the hooting and hollering I did from the sidelines.

He didn’t know it, but one year, I watched him on the playground during recess for two weeks straight. I sat in my car just a few yards away. I wanted to make sure he was safe from some bullies that had been bothering him. I wanted to be there if they tried again so he’d know that he was important to someone. So he’d know he was so much more than what those bullies made him feel. I wish I had told him how in awe of his bravery I was. Just in awe of the way he crossed the parking lot alone each day into the school where he’d have to face those boys.

He crossed paths with a girl and made her his own. On prom day, he crossed the bridge over the pond at the park. His hand firmly ensconced in hers. I had to wipe the tears away so he wouldn’t be frustrated with my mush. But he was so dapper in that tux. It was the first time I could see the confidence–confidence worthy of who he was–beam out from his eyes, from his smile, from his very pores. Long gone was the timid tortured child who clung to his mother. In his place stood a growing tower of tenacious spirit exercising its separateness. And as he crossed the road to his awaiting car, I thought to myself, “There he goes…There he goes.”

Once, he crossed the line. So did I. We said things we couldn’t take back. Both he and I. Throwing hate like confetti. Faces reddened. Eyes bulged. Voices scratched. Nails dug in figuratively for blood. He, angry with me for my mistakes and my shortcomings. And me, angry with him for his. But luckily, we didn’t stay cross forever. No angry words could ever change how much I love that boy.

It’s kind of funny, darling daughter, over the years that brother of yours has crossed so many things and so many places; he crossed into his teen years with a limo and a party. He crisscrossed the halls of the middle school and high school. He crossed basketball courts and football fields. Heck, he’s crossed the roads to and from our house and his dad’s house probably thousands of times.

And the stages…oh how many stages he’s crossed in his lifetime! Music stages and concert stages, show stages and voice recital stages, instrument stages and a cappella stages. You name the kind of stage, he’s probably walked, danced, sang, or played across it. And as his mama, watching him cross those stages has been my greatest pleasure because they were just where he belonged. On those stages, he was full of confidence and swagger and there was just with no way to hide his passion, no way to hide his talent, no way to hide the satisfaction he felt.

And then there’s today’s stage; the graduation stage. Why did I cry when he walked across THIS stage you ask? Well, one reason is that this day, this moment has been a dream I have held for him for 22 years. And when long dreams like that come true, one can’t help but cry. But also, I think we cry because mamas like me know that this is the last stage our children will cross before they become adults. Before a career will become his world. Before a girl will become his world. Before his apartment, his car, his bills become his world. This is the last moment that those children of ours, are…well…OURS. And while some of our tears come from the fruition of hope that we’ve had for our children from the moment they were placed in our arms, they also come from the realization that our arms can no longer be the only ones who hold them.”

Logan has lived in Glens Falls, NY all her life. By day, she is an educator with 20 years experience, a mom to Aidan and Gannan, her two teenage boys, a new mommy to a beautiful daughter, Ila, and wife to the love of her life, Jeffrey. By night, weekends and any spare time she can find, Logan writes. She loves memoir and also adores writing essays about the challenges of parenthood. This year she started a parenting blog called A Muddled Mother, an honest place where mothers aren’t afraid to speak of the complications and difficulties that we all inevitably experience. Logan has been published in various children’s and parenting magazines including Today’s Motherhood, Eye on Education, Faces, and Appleseed.  Logan’s previous column for Hilltown Families, Snakes and Snails: Teenage Boys Tales ran bi-monthly from June 2010-Feb. 2011, sharing stories of her first time around as a parent of two teenage boys. — Check out Hindsight Parenting: Raising Kids the Second Time Around on the fifth Tuesday of the month.

← Learning Ahead: May 30th-June 3rd, 2016
Book Clubs for Early Literacy and Lifelong Learning →