Open Sesame: The Lure of Foxes

There’s something about foxes. Something magical. And beautiful. And wild. Their expressive faces, their curious, intelligent nature, their coats of fire or of smoke enchant me, and remind me of my innate connection to the natural world. Whether it’s a red flash in the snow, the playful pounce of kits in the morning sun, the silhouette of a bushy tail disappearing into the woods, or a shrill bark at twilight – every encounter with a fox lures me to my own wildness. That is why I was immediately drawn to two new middle grade novels which weave the stories of children and foxes.

Both of these stories unfold through the point of view of the human characters and also from the point of view of the foxes, and the experience of being in the foxes’ world is riveting. But these are not light-hearted stories. Emotionally compelling, achingly real, these are stories about love and loss, the costs of war, grief, soul purpose, and hope. These are stories about the relationship between humans and their environment, the spiritual connections among every living thing, and the perilous impact of humans on the natural world. It’s sensitive material, but deftly handled by the authors, these are shimmering, powerful stories for middle grade readers and up. 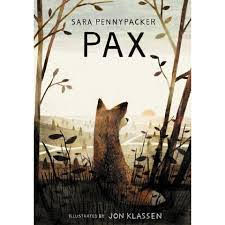 War comes to a young boy’s town, a town that could be any town around here. It is never stated exactly, but it doesn’t matter. What matters is that the war is happening, a war over water rights, changing everything and everyone in its path, including 12-year old Peter. When his father decides to join the military, Peter must go to his grandfather’s and he must leave behind Pax, his beloved pet fox. But Peter and Pax are inseparable, and have been for years, ever since Peter rescued Pax when he was just a tiny kit. Devastated by his father’s betrayal and his own betrayal of the creature he loves most, Peter runs away from his grandfather’s house, determined to find Pax, even though he is 300 miles away. Peter’s journey is stopped short when a broken foot forces him to seek shelter on a rural farm with war veteran and voluntary hermit, Vola. Vola shows him great kindness, sets his broken bone, builds him crutches, and teaches him how to work her amazing marionettes, which tell Vola’s own painful story. She and Peter develop an honest and beautiful friendship and help set each other free in simple, yet profound ways. Meanwhile Pax is waiting for his beloved boy and learning how to survive in the wild. Pax is taken in by a vixen, Bristle, and her brother, Runt, who show him the ways of wild foxes. Pax discovers a new loyalty for his fox family and an alarming view of the destructive impact of humans. When Peter is well enough, he continues his journey back home to Pax, but the area has been evacuated and is being patrolled by military. Explosives wind through fields along the river where Peter once loved to play. In a pinnacle moment Peter and Pax are reunited, but their lives will never be the same together. The heart wrenching conclusion leaves the reader with a lot to reflect on and to imagine, but the overall feeling is one of hope and love, of acceptance and healing, and the feeling that the story goes on, for both Peter and for Pax, and that neither go on alone. Black and white drawings by Jon Klassen add to the emotional arc. A deep and powerful story. 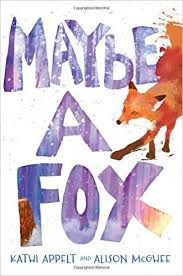 Sylvie and Jules are more than sisters, they are best friends. Living with their dad in Vermont, and still healing from the sudden death of their mother several years earlier, the girls have a strong bond that has held them together through tough times. Then one winter morning before school, as the girls are building a tiny snow family, Sylvie decides to throw a wishing rock into the “slip,” a dangerous part of the river that disappears underground, a place where their father has forbid them to go. But Sylvie is fast, really fast, and she promises Jules she’ll be back before the bus arrives. Jules waits and waits, but Sylvie never returns. At the same time, a shadow fox is born. Senna is a creature who is half of the spirit-world, and half of the animal-world, arriving with a special mission, though she does not know what it is, only that she must be fast, really fast. In the human world, Jules is devastated by the loss of her sister, and takes comfort in her rock collection, in her friendship with Sam, and in quiet visits with Sam’s older brother Elk, who is also grieving. Having just returned from fighting the war in Afghanistan, Elk is dealing with post-traumatic stress and the loss of his best friend, Zeke. Both Jules and Elk find solace in the woods around their homes, and in connections with wild animals- Elk with a catamount, and Jules with a fox, who she senses is connected to Sylvie somehow. In alternating chapters that are told from the voice of Jules and from the voice of the fox, a mythic story unfolds that reaches across physical and nonphysical worlds and explores the spiritual connection between all beings. As Jules unravels her feelings about Sylvie’s disappearance and her fading memories of their mother, she knows she must make one final wish for her sister. Though she has solemnly sworn to never go near the slip again, Jules makes her way down to the river. And in a peak moment that brings together humans, animals, and the shadow world, the lives of Sylvie, Jules, Senna and their mother connect in an epically beautiful, heart-achingly stunning scene. A fantastic story that is at once wrenching and completely uplifting.