The Ripple: The River Knows the Way

Sustainability: the River Knows the Way 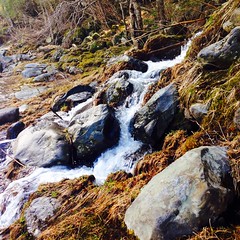 Biology tells us that water is life. Religion tells us that life is sacred. Biology does not want to admit that life is sacred (because that would not be “objective,” but it would not exist without water.  Think of any biologist and name one not totally dependent upon water for life. Einstein’s brain was 75% water, and so are ours. Think of how you are reading this now—to some actual extent, water is reading this too. As a hard science, biology is a means for water to get to know itself—for water is life and life/bios is what biology studies.

Rivers are alive. In India, the Ganges is worshiped as a holy entity, a goddess; it is sacred. Our rivers, in contrast, are not considered sacred. This difference in valuing rivers is culturally and not scientifically based. It is interesting, isn’t it, how the same objective geomorphic entity—the river—either has the highest value we can give to it (the sacred) or not so much.

The reason we don’t consider rivers to be sacred is because of the stories we have been taught, for these are stories that we live in, that define our character and the plots we live out as daily life. Our stories—the western religions, the history of the United States, the myths of industrial capitalism—draw attention away from the biological fact that life is water, and that rivers are sources and bodies of life.

Over time, these stories have helped to us ignore our connection to the entire water cycle, to the extent that we are surprised when drought occurs and upends our industrial patterns of behavior. The drought in California, for example, has caused those most deeply invested in industrialism to call for more dams, reservoirs and pipes, as if that will solve a problem that is much deeper. We have changed the climate with our machines by expelling too much greenhouse gas into the atmosphere. We have also desertified vast parts of the earth by cutting trees—the same trees that absorb greenhouse gases. The problem of the California drought cannot be solved by investing in more unsustainable industrial infrastructure, but can be by planting trees and enlarging forests.

The problem of the California drought is a problem of inhabitation, of a stubborn clinging to industrial form of inhabitation; for, there are others ways we can inhabit the earth that do not create deserts. “California” is a culture, a set of stories that people live and act out the part they play in. In terms of the time scheme that all other creatures share in that state, “Californians” have very recently arrived in those parts. In that short time, they have dramatically transformed the natural water systems to serve industry. Now they find that, despite all of their religious, scientific and economic stories, they have ignored their place. Like us here in the hill as and valleys of Western Massachusetts, as the fossil-fuel era concludes Californians will have to choose what parts of their industrial infrastructure is worth saving and what is not.

The sustainability crisis is as much a crisis of imagination as it is of technology and economics. We prize activities that ignore water, and those activities—like lawns in the desert—are the ones that can’t continue when the water disappears. Because the stories that shape us ignore water, we have difficulty imagining how to inhabit the earth in a way that places water at the center of focus, and that values water as the integral component of life. If we consider our own lives sacred, why shouldn’t we consider that which comprises us as the same?

So let us use biology and religion to imagine a way of inhabitation that respects water as life and rivers as sacred; water actually is sacred from a scientific perspective; because without water there is no science. And no religions. Without life, nothing is sacred.

Get thee to the river and stand at its bank. Look into the water patiently. Soon, you’ll see something move. Focus on it. You’ll notice more life then, over to the side; reset focus and see what’s happening. Be patient; shut off thought by opening perception. Absorb the activities, observe the patterns, imagine the community of creatures that make where you are not a desert. The trees immediately are felt as the keepers of the rain, catchers of the flying rivers.

With this sort of practice that focuses on sensual perception, the imagination grows in ways that are non-industrial. Stepping out of the stories of the past, let the river take us.

It knows the way.

← It is Your Right to Remain Silent!
Local Expert Q&A: The Importance of a Will →