Posted on April 5, 2016 By Hilltown Families 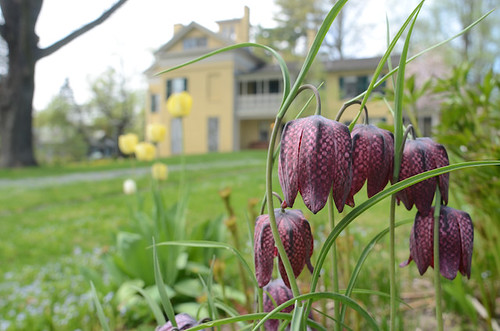 Bee! I’m expecting you!
Was saying Yesterday
To Somebody you know
That you were due –

The Frogs got Home last Week –
Are settled, and at work –
Birds mostly back –
The Clover warm and thick –

This poem by Emily Dickinson was written in 1865 during the most productive period of her writing life. By the time she turned 35 that year, she had produced more than 1,100 of the 1,789 poems we know of today.

When you visit the Emily Dickinson Museum, you’ll step into the creative space of one of America’s greatest poets. The Museum includes the Homestead, where Emily Dickinson was born and lived most of her life; The Evergreens, home of the poet’s brother and his family; and three acres of the original Dickinson property in the center of Amherst, Massachusetts. While Dickinson wrote the majority of her poems in her upstairs bedroom, all of these environments deeply inspired her work.

Poems like “Bee, I’m expecting you!” reflect Dickinson’s love of nature. Whether looking out the Homestead windows across the Dickinson hay meadow, working in her garden, taking walks with her dog Carlo, or playing with her niece and nephews at the Evergreens, she made a constant study of the world around her. The flowers, birds, animals, and insects that shared her Amherst surroundings were the source of many of her poems, so spring is a wonderful time to see firsthand some of the things that inspired her creativity.

During tours, Museum guides share the details of Dickinson’s life and those of her family, and they also give intimate glimpses into her work. Visitors learn about Dickinson’s writing style, her unique grammatical approach, the ways in which she revised a poem and bound over 800 of her finished poems into fascicle books, and how her poems were discovered, and eventually published to worldwide acclaim, after her death in 1886. Tours of the Homestead conclude with a chance to read Dickinson’s poems in her home, or under the shady cover of her great White Oak tree.

In addition to regular tours, the Museum also offers group tours that can be adapted to suit visitors’ interests. Learn more about all of the Museum tour options at www.EmilyDickinsonMuseum.org/visit.

April 19: Teacher Tuesday
The Museum presents Teacher Tuesday on April 19 from 3:30 to 5:30 p.m. All educators are invited to this free program where they’ll explore the Emily Dickinson Museum at their leisure. Make a fascicle, read or write in Emily Dickinson’s bedroom, and try your hand at transcribing a poem from Dickinson’s own handwriting. Whether you teach American literature, visual arts, or science, the Museum staff can help inspire your next project with your students.

Sundays in May: The Poet and the Bard
In 2016, the Folger Shakespeare Library presents “First Folio! The Book That Gave Us Shakespeare,” a national traveling exhibition bringing the First Folio to 50 states, Washington, and Puerto Rico. Amherst College will be the only Massachusetts stop for the traveling exhibition. In conjunction with the exhibit, the Emily Dickinson Museum will provide Shakespeare-inspired programming.

Every Sunday in May at 10 am, beginning May 8, the Museum will also offer The Poet and the Bard, a tour that explores Dickinson’s lifelong fascination with William Shakespeare.

May 28: Dickinson Meets Shakespeare in the Garden
Enjoy an afternoon performance Saturday, May 28 at 1:30 pm in the garden at the Emily Dickinson Museum, where actors bring to life scenes from Dickinson’s most beloved plays by William Shakespeare, interspersed with works by the poet. This event is free and open to the public.

June 3-5: Garden Days
Volunteers rejuvenate Emily Dickinson’s garden for the summer at this annual event. All are welcome.

July 16: Creatures of Bliss and Mystery: A 19th Century Children’s Circus
On Saturday, July 16, the Emily Dickinson Museum will present its annual “Creatures of Bliss and Mystery: A 19th-Century Children’s Circus,” from 1 to 4 pm on the Emily Dickinson Museum lawn. Especially perfect for children ages 3 to 10 (accompanied by adults), this event is open to the public. Cost is $5 for families and free for EDM Members. The title of the event, “Creatures of Bliss and Mystery,” comes from recollections of a home-grown circus produced by Emily Dickinson’s niece Martha and nephews Ned and Gib: “It never occurred to us that we were not creatures of bliss and mystery—that the Ringmaster was really Ned with trousers tucked into rubber boots, cracking his whip and making jokes with the clown, Will Mather in private life, stuffed out with a pillow, red spots painted on his face, —or that the performance was a bit less dazzling than the one we had seen the day before, —especially if Ned sang his circus song picked up from the real ring.”

July 29: Neighborhood Picnic
A neighborhood picnic will be held on Friday, July 29 from 5 to 7 pm. All are welcome! Bring your own picnic and enjoy Dickinson’s gardens on a summer evening. Short twilight tours of the museum and other family-friendly activities will be offered.

Learn more about the Emily Dickinson Museum’s events at www.EmilyDickinsonMuseum.org/events.

Lucy Abbott is the coordinator of group tours and public programs, Brooke Steinhauser is the program director, and Michael Medeiros is the public relations coordinator at the Emily Dickinson Museum.  To celebrate their 10th anniversary, Museums10 members are writing a monthly column in Hilltown Families about all there is to explore and discover in their collections.