Miniature Tracks of Insects in our Local Habitat

When we think of tracking in nature, our minds generally drift to following the footprints of somewhat sizable creatures – generally mammals, and sometimes birds. Some of nature’s most fascinating and beautiful tracks and sign are, however, left behind by the smallest creatures of all: insects! Insect tracks and sign can be found in abundance and in many forms – if you know where and how to look. 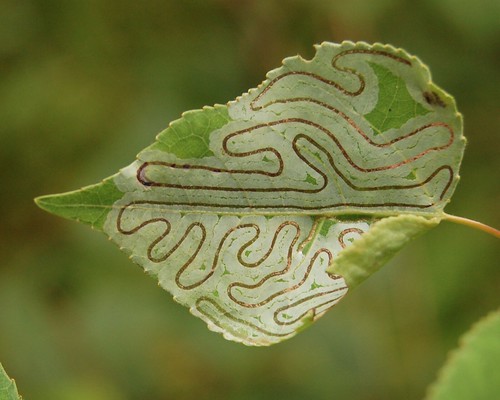 Families can explore the miniature world of insect tracks through a special photography exhibit at the Westhampton Library featuring the work of Charley Eiseman, one of the country’s best entomologists and inhabitant of the Connecticut River Valley. Co-author of Tracks and Signs of Insects, Eiseman has explored the insect world extensively, and his photographs show not only attention to detail and beauty, but deep knowledge of the habits of insects, whose sign can easily go unnoticed by the untrained eye.

A special opening event will take place on Thursday, April 7th, 2016 at which Eiseman will present a talk titled, “Native Plants as Insect Habitats.” Visitors are welcomed to bring their own examples of insect tracks and sign in order to have them identified and perhaps explained by the renowned entomologist! Families can conduct their own insect-centric treasure hunts before the exhibit’s opening so as to take full advantage of this unique opportunity. Perhaps you’ll find some early evidence of the insects of spring or consider the role of climate change in explaining high amounts of insect-related evidence.

← Under the Hat: School of Rock
Interconnections Between the Birds & the Bees →