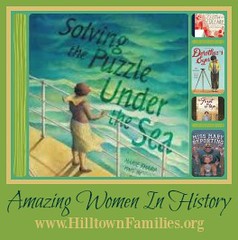 One of the many aspects of the picture book I adore is that they are compact vessels of information. My children and I often have the experience of discovering little-known pieces of history and fascinating people of interest while immersed in a picture book biography. And this month has been no exception.

In the five new picture books presented here, all of which honor women in history, I was familiar with only one name. What a marvelous power the picture book holds in this regard – to tell the story of important but overlooked pioneers, to share their life and work through art and narrative, and to introduce children to the idea of dreaming big.

Here are five inspiring stories about girls who made a difference, packaged ever so delightfully in the form of a picture book.

Cloth Lullaby: The Woven Life of Louise Bourgeois, written by Amy Nevsky and illustrated by Isabelle Arsenault, is a picture book biography about world-renowned modern artist, Louise Bourgeois. Best known for her large installation art sculptures, including the famous 30 ft. tall spider statue Maman, Louise started as a tapestry artist, weaving and repairing cloth like her parents. She grew up in France, and was deeply inspired by the river she lived near, the flowers and stars, the weaving of cloth which was an ever-present feature of her family’s life, and her loving mother, who inspired some of Louise’s most notable works. She later moved to New York and became an influential artist, working through all of the 20th century avant-garde movements, from abstraction to realism, and wrote several books on art and meaning. In her last years, Louise made fabric drawings and cloth books, and used her own clothes and the clothes of her loved ones as pieces of sculpture, weaving memory into her art. The story is told in poetic language and filled with lovely imagery both in words and in illustrations, which are rendered in hues of gray, red, and indigo. Crosshatch, giant flowers, and spirals give the pages a cloth-like appearance and scrapbook feel. A unique introduction to a fascinating artist.

The First Step: How One Girl Put Segregation On Trial

The First Step: How One Girl Put Segregation On Trial, written by Susan E. Goodman and illustrated by E.B. Lewis, tells the compelling story of the beginnings of equal rights and integrated education. In 1847, young Sarah Roberts, an African-American student, was told to never come back to her school in Boston because it was for white children only. Sarah’s family decided to fight that rule and took their case, Roberts v. City of Boston, to the Massachusetts Supreme Court in what would be the first legal step to outlaw school segregation, 100 years before Brown v. Board of Education and the Civil Rights movement, and more than a decade before the Civil War. It was also a groundbreaking case because it was the first time an African-American lawyer had argued in the Supreme Court. Though they lost the trial, Sarah’s father continued to gather support, traveling all around the state to talk with people, and in 1855, Massachusetts became the first state to outlaw school segregation. A beautifully illustrated book, Lewis’s watercolor paintings are full of emotional weight, and show how big change can start with a small step.

Miss Mary Reporting: A True Story of Sportswriter Mary Garber, written by Sue Macy and illustrated by C.F. Payne, opens with a feisty, young girl playing tackle football in the 1920’s. That girl is Mary Garber, and she loves sports! Playing sports, watching sports, reading about sports, and as an adult, writing about sports. Traditionally a man’s job, Mary broke new ground when, during WWII, she took over the sports desk at the newspaper where she worked. During a time when women were not even allowed to sit in the press boxes at sporting events, she defied the status quo as one of the first female sports journalists in American history. Miss Mary became known for reporting on teams and players who were off the radar of mainstream media, such as African-American leagues and athletes, and for doing her job with integrity and respect. A lively and interesting storyline accompanied by expressive mixed media illustrations make this picture book biography a great introduction to an amazing woman and her slice of sports media history.

Dorothea’s Eyes: Dorothea Lange Photographs The Truth, written by Barb Rosenstock and illustrated by Gerard DuBois, is a picture book biography of Dorothea Lange. A young girl who sees with her eyes and heart and who is teased because of her limp, Dorothea often feels different and lonely and tries to make herself invisible, a skill which helps her become an acute observer and later, a celebrated photographer. Dorothea challenges the odds of becoming a photojournalist in a male dominated field. Focusing her lens on the invisible victims of the Great Depression, she uses her pictures to tell the story of a people ignored by the rest of the world, creating some of the most iconic images in American history, with truth and love. The clear, straight-forward storyline simmers with emotion, while the vintage style illustrations place the reader in the early 20th century.

Solving the Puzzle Under The Sea: Marie Tharp Maps The Ocean Floor

Solving the Puzzle Under The Sea: Marie Tharp Maps The Ocean Floor, written by Robert Burleigh and illustrated by Raúl Colón, is the story of pioneering scientist, Marie Tharp. The daughter of a cartographer, Marie was fascinated by maps and by the ocean ever since she was a little girl. When she was in college, she learned no one had ever mapped the bottom of the ocean, and the seed of a dream was planted. With imagination and fierce determination, she forged her way into the world as a woman scientist, hurdling every obstacle which presented itself and gaining support for her trailblazing research. From 1957-1977, she collected data, piecing information together like a puzzle, to chart the ocean floor. Her exhaustive research created the very first map of the seafloor, a picture with colorful markings, peaks, and plains that ended up in museums and on people’s living room walls. Her ground-breaking work also helped support the theory of continental drift. An engaging first person narrative accompanied by textured watercolor and pencil illustrations, which are beautiful, warm, and inviting, make this book an excellent read for explorer’s of any age.