Posted on February 9, 2016 By Hilltown Families

Every month, Hilltown Families features a new nature table whose contents inspire learning along a common theme easily spotted in our surroundings that month. A tradition carried out by teachers, environmental educators, and nature-curious families, nature tables bring a little bit of the outdoors inside for inspection, dissection, identification, creative play, art projects, and lots of other educational activities. The idea behind a nature table is to help open up children’s eyes to the unique attributes of each season, and to help them learn how to see these things in nature for themselves. A nature table can include a variety of items, and is often accompanied by a set of books and/or field guides so that children can take part in further learning at their own will.

We, like the creatures we share our landscape with, spent the better portion of the fall and early winter resigning ourselves to the necessary hunkering down that the coming of cold and snow so requires. Perhaps as the result of being beaten into submission by last year’s constant snowfall (or maybe in anticipation of another year’s worth of excessive drifts and banks), we found snow boots, ski pants, thick coats, and all manner of hats and mittens at the first sign of frost this winter, and as soon as the daylight began to wane, we receded further into our indoor bunkers, hiding out stubbornly until the arrival of springtime. But now – much like creatures whose bodies adapt to the seasons – we’re finding that our stubborn reluctance and our thick layers are simultaneously unnecessary. The unseasonably warm temperatures as of late are inspiring us to end our self-imposed semi-hibernation; bare arms are making a comeback.

Here in western Massachusetts, many of the creatures with whom we share our landscape follow a winter routine quite similar to ours. Coats thicken, food is stockpiled, and the big rest is near. Local woodchucks, bears, bats, chipmunks, and certain mice take wintertime hibernation the most seriously, their bodies stockpiling layers of fat in order to support them through months’ worth of waiting and occasional waking. Other familiar local creatures like raccoon, skunk, and squirrel follow a pattern of hunkering down when winter hits, but they don’t hibernate quite as seriously as some of their other mammalian cousins. These creatures can still be spotted poking around their familiar warm season haunts, but are far less active during the winter. Regardless, the creatures know what’s up: when it’s cold, food becomes scarce, and hiding out (awake or asleep) is the best way to pass the time and ensure survival.

But not this year. This year, it’s warm. December felt like March, January felt like March, and February is showing all of the early signs of year another month of March. So what’s a mammal to do when the weather doesn’t match what they’d planned for? Get out more! In our west county community, locals big and small have spotted critter neighbors with far greater frequency this year than any other in recent memory. Tracks are scarce (due to lack of snow), but other signs are present, including the unfortunate increase in mammalian roadkill – the mid-winter appearance of which speaks to the unusual amount of activity going on in the animal world. 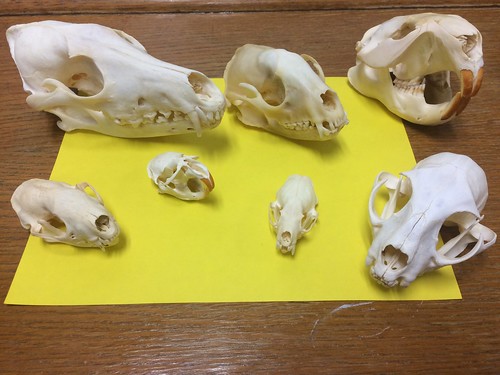 This month’s nature table includes a variety of treasures meant to remind us of our hibernating (and semi-hibernating) neighbors. We’ve considered the things that they eat in order to better understand their movement, and we’ve looked at their skulls and teeth in order to better understand their body structure. We’re thinking about where they might be hiding out in our immediate surroundings, and are keeping an eye out for further signs of activity (other than disappointing carcasses).

This month’s nature table includes the skulls of the following local mammals to better understand their anatomy and physiology: