Posted on February 9, 2016 By Hilltown Families 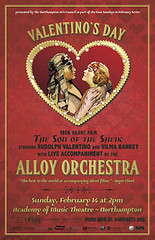 The first of these two such events is a special screening of classic film, The Son of the Sheik. Shown with live accompaniment from the Alloy Orchestra, the screening will feature the recently digitally remastered version of the 1926 original classic. Starring Rudolph Valentino, known as the first great lover of the silver screen, the movie is touted as one of the best love stories in film (and is, appropriately, going to be shown on Valentine’s Day!). Alloy Orchestra’s original score will add to the grandeur of the film, blending the sounds of a collection of surprising instruments to create a score created just for the film. After the screening, audience members can choose to stay for a Five College film and music master class, in which Alloy Orchestra will outline their compositional process. The screening is part of the Northampton Center for the Arts’ Four Sundays in February series, and will take place at 2pm on Sunday, February 14th at the Academy of Music.

The second local silent film event will take place at Mass MoCA, and features the musical talent of the Alloy Orchestra. Orchestra member Ken Winokur’s Psychedelic Cinema is a live music and art project pairing original music with cult filmmaker Ken Brown’s icnonic 1960’s Super 8 films, which have been used as light shows for greats such as Jimi Hendrix, the Grateful Dead, and Sly Stone. Winokur’s music will pair traditional instruments like keyboard and clarinet with “junk percussion,” unique sounds produced from nontraditional music-making objects. Screened at 8pm on Saturday, March 8th, the film-and-music event will be held in Mass MoCA’s Club B-10 space.

Ideal for teens interested in exploring the art of filmmaking, these two upcoming events share common elements but are vastly different. Together, the two silent film screenings illustrate the vastly different ways in which film and music can be used in conjunction to share a concept or aesthetic.