Soup’s On: How Cooking Shows Teach

Posted on January 19, 2016 By Hilltown Families

Why I Will Let My Kids Watch Cooking Shows 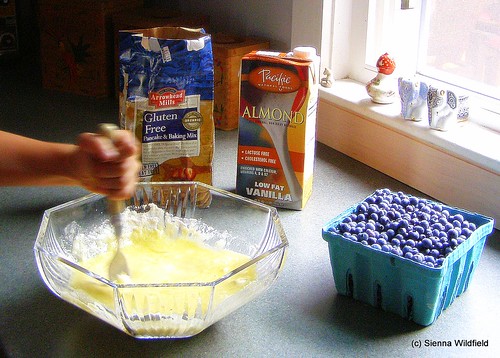 Cooking shows are robbed of their central sensory features – the ability to smell and taste the food being prepared. To compensate, they have to create a full-spectrum visual and audio show that captures and keeps the audience’s interest. How do they do it? By treating the viewers like toddlers.

When our kids are very young, we’re taught to envelop them in a cloud of words – to narrate their actions, what they might be thinking, and to explain the steps of our own thought processes as we maneuver them through the day. It often sounds something like, “And now we’re getting in the car, and I’m going to buckle you in, and then we’re going to the post office…”

A variety of published studies have touted the benefits of talking to our kids, but there does seem to be a cutoff – an age where a child’s questions begin to steer the conversation, rather than our pattering observations. This is totally normal, and kids’ inquisitiveness certainly leads us to a variety of conversations we might have never otherwise had. (“Well, I don’t know if giraffes ever feel angry; what do you think?)

And at some point – much to many parents’ relief – the ceaseless questioning begins to taper off, as kids find their own tools for discovering the world. However, when I teach kids in the kitchen, I find myself reverting to the patter-narrative patterns that I would use for much younger kids. Why? Because like driving cars and tying shoes for the younger set, the methods of kitchen work are often a mystery to older kids, even kids with parents who love to cook.

This is where I make my case for cooking shows. Cooking shows like Iron Chef and MasterChef have been the subject of much caterwauling among professional chefs, who resent the “anyone can do this” approach to an art form that takes years of grinding labor to master. But whenever I meet a kid who’s watched Masterchef Junior, or Chopped, I know they’re going to have a greater baseline knowledge than kids who don’t watch them.

I’ve thought a lot about why the kids who watch cooking shows have such an edge on those who don’t. They come into the kitchen with a much broader vocabulary, and understanding of kitchen tools. They even sometimes know how to talk about flavor balancing (even if they don’t even yet have the skills to actually balance the flavors in a dish.)

Cooking shows are robbed of their central sensory features – the ability to smell and taste the food being prepared. To compensate, they have to create a full-spectrum visual and audio show that captures and keeps the audience’s interest. How do they do it? By treating the viewers like toddlers.

I don’t mean that cooking shows talk down to their viewers, or engage in cutesy behavior. I mean they run a constant narrative patter that walks the viewer/listener through each step of both the thought process and the cooking process. They fill the program with words and talk. And we humans, knowledge sponges that we are, soak it up readily, especially when it’s combined with the visuals of people using blades and fire to make delicious-looking dishes.

If you want to get a reluctant kid invested in cooking, I’d be hard-pressed to find a more useful way than to let them watch the occasional competitive cooking show. Food Network’s Chopped is particularly good for this, as the chefs are presented with mystery ingredients – their thought processes are very articulate, concrete, and robust as they move through each round of the challenge.

Who knows? It just might inspire them to head for the stove!

← Learning Ahead: January 18th-24th, 2016
Resources for Learning About the Experiences of People With Disabilities →