The Symbolism of Food on New Years Eve

Posted on December 29, 2015 By Hilltown Families 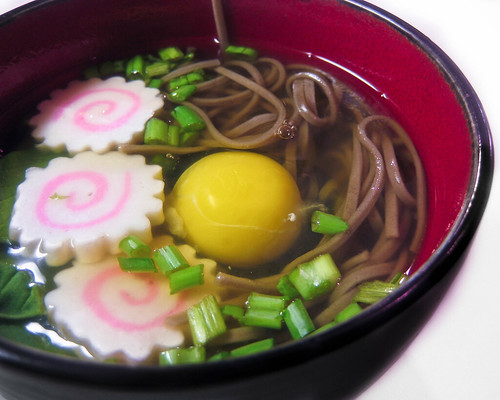 Families can celebrate the beginning of Japan’s new year by enjoying toshikoshi soba – a dish that symbolizes long life and good luck in the coming year.

On December 31st, most of the world celebrates the coming of a new year. Throughout the last day of the year, many countries mark the new beginning with different cultural celebrations. Food, in particular, plays an essential role in these celebrations and is thought to serve as a  symbol of things to come in the new year. This year, learn about cultures around the world while adding fun and delicious customs to your family’s traditions for marking the new year.

Countries on Asia’s Pacific coast celebrate the new year hours before we do here in western Massachusetts, and families can mark the beginning of Japan’s new year by enjoying toshikoshi soba – a dish that symbolizes long life and good luck in the coming year. In English, the dish’s name means “year-bridging,” and it’s imperative to slurp entire noodles (rather than biting them in half) to ensure that toshikoshi will, in fact, guarantee a long life. Since Japan’s new year begins about fourteen hours before ours does, make toshikoshi for a New Year’s Eve lunch!

On New Year’s Eve in Spain, tradition dictates that everyone eat grapes at the stroke of midnight. Grapes are devoured – one for each stroke of the clock – and symbolize the twelve months of the upcoming year. Taste them carefully, though – while each sweet grape symbolizes a sweet month to come, a sour grape signifies a month to watch out for! Begin your dinner with grapes to celebrate along with the Spaniards, whose midnight comes six hours before ours…

Here in the United States, Hoppin’ John is a food eaten in the southern states on New Year’s Day. Made with a base of rice, ham, and black-eyed peas, Hoppin’ John is thought to bring prosperity in the new year. Peas, lentils, and other similarly shaped legumes appear as a symbol of wealth and prosperity all around the world, and this particular dish offers a southern-style twist on the tradition. If you don’t finish the whole batch on New Year’s Day, called it Skippin’ Jenny when you enjoy the leftovers – thought to symbolize frugality and further prosperity.

One other New Year’s Eve custom found in cultures around the world is the inclusion of a coin in a baked good – especially round-shaped ones. Use your family’s favorite cookie recipe to make coin-shaped treats to symbolize wealth (and not just in the financial sense!), or bake round cakes with a coin hidden inside. The person who finds the coin in their piece is thought to enjoy a year of good luck and wealth.

← How Playing an Instrument Benefits Your Brain!
The Good Life: The Importance of the Journey →