Open Sesame: End-Of-Year Round Up for Children’s Literature

Posted on December 22, 2015 By Hilltown Families 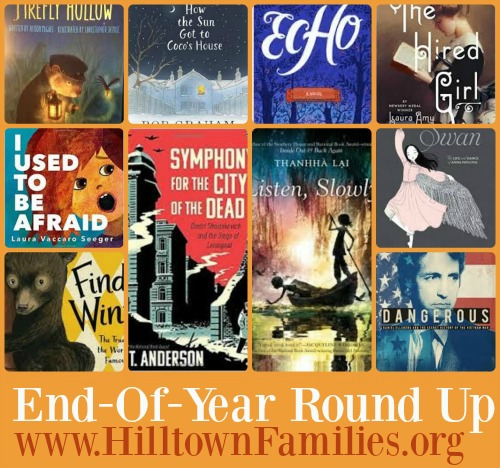 2015 has been a fantastic year for children’s literature. Every week our library bag was full of amazing books, many of which I’ve shared with you here. And I can’t let the year come to a close without telling you about just a few more!

Check out these notable picture books and middle grade and young adult novels, including one of the best narrative nonfiction books I have ever read.

How The Sun Got To Coco’s House traces the journey of the winter sun from the frozen tundra, across wide ocean, through icy forests, over desert and mountains, from small villages to big cities, all the while touching the lives of children and their families around the world. Eventually the winter sun barges into Coco’s bedroom where it greets her in the morning as she wakes. The sun follows her through the house and then outside where Coco and her friends build a snowman and enjoy the sun all day. A cheerful story with lovely watercolor illustrations.

In the picture book, I Used To Be Afraid, a young child explains, how she used to be afraid of things like spiders, shadows, and the dark. But she’s not afraid anymore. Clever use of cut-out shapes appear as one thing, but change when you turn the page. A dark circle becomes the bright full moon, a scary shadow becomes a heart. Readers can see how perspective changes something fearful into something pleasing. Thick, glossy pages covered in bright color are inviting and will hold up to small, busy hands. A simple, but thought-provoking picture book for young children.

Finding Winnie: The True Story of the World’s Most Famous Bear begins with a mother telling her son a story. She explains how a hundred years ago a young veterinarian from Winnipeg, Canada, was called to duty overseas during WWI. At a train station in Canada, he was inspired to buy a bear cub from a trapper. He named the bear Winnipeg, Winnie for short, and she became the regiment’s mascot, traveling with the soldiers across North America and the Atlantic Ocean and on to England. Before Harry was sent into battle, he brought Winnie to the London Zoo. A young boy, who had wanted a name for his teddy bear, saw Winnie at the zoo and knew right away he’d call his bear Winnie the Pooh. As luck would have it, the boy’s father was the writer, A.A. Milne. A fascinating story with wonderful illustrations, connecting the author’s great-grandfather to the most famous bear on the world.

Swan – The Life and Dance of Anna Pavlova is a poetic tribute to the Russian ballerina. Through beautiful illustrations and lyrical prose that dances across the page, this picture book gives a sense of Anna Pavlova’s life from her girlhood dreams of dancing on stage to her revered role as the dying swan to her legacy of bringing ballet to the far corners of the world. A lovely picture book biography that even the youngest ballerinas will enjoy.

In Firefly Hollow, young Firefly is learning how to fly. Despite what other fireflies think, Firefly wants to fly all the way to the moon. She befriends Cricket, who despite what other crickets think, wants to play real baseball. Together they pursue their dreams beyond the safety of the hollow, where they meet Vole, who is imagining his own great adventure, and Peter, a young boy who is transitioning to life without his best friend. A dozen full-page color illustrations interspersed with many more small black and white pictures add a storybook feel to the book’s design, while the square-ish size feels good in the hands. Generous font and line spacing lends a lot of white space to the page, making this a great choice for early middle grade readers.

Listen, Slowly tells the story of 12-year old Mai, who is sent to Vietnam to help her grandmother find out what happened to her grandfather during the Vietnam War. A spunky, American pre-teen, Mai must make adjustments to life in Vietnam, while supporting her grandmother’s search for peace and closure. Her first person narrative is humorous and engaging as she navigates the dynamics of culture and develops meaningful connections to her extended family, while unraveling the mystery of her grandfather’s disappearance. Mai’s complete immersion into Vietnamese life shines through the narrative, allowing readers to experience the tastes, sights, scents, sounds, and feel of her native country. An uplifting read with an interesting plot line and a remarkable setting.

Symphony For The City Of The Dead : Dimitri Shostakovich and the Siege of Leningrad is the riveting true story of Russian composer, Dimitri Shostakovich. A musician of masterful ability and titanic bravery, Shostakovich wrote many moving symphonies for the people of Mother Russia. But it was his Leningrad Symphony, written during the siege of Leningrad in WWII, that lifted the Russian people out of misery and awakened their spirits during a time of atrocious human suffering and violence. A magnificent and thrilling book that shows the transcendent power of music, and the resiliency, strength, and defiance of the Russian people against the backdrop of cruel dictatorship. Direct quotes masterfully woven into the narrative provide a raw, emotive glimpse into history. The well-designed book can be read cover to cover or used for reference with extensive source notes, bibliography, and index. Easily one of the best works of narrative nonfiction I have ever read – I could not put it down. Highly recommended for teens and adults.

Most Dangerous: Daniel Ellsberg and the Secret History of the Vietnam War unravels the events leading up to and the fallout from the publishing of the Pentagon Papers, a top-secret government study of the Vietnam War. At the center of this political firestorm was Daniel Ellsberg, who exposed the papers to the American public and revealed decades of government lies. The epilogue touches upon modern day whistleblower, Edward Snowden, showing how the issue of secret government documents is still relevant today. Another excellent work of narrative nonfiction for teen readers.

The Hired Girl opens on a Pennsylvania farm in 1911, where 14-year old Joan realizes life with her mean-tempered father and hard-knuckle brothers is destined for drudgery and unhappiness. In a brave act of rebellion, she runs away to Baltimore where she takes a job as a hired girl for a Jewish family. Through heart-felt diary entries written with truth and poise, Joan shares her story of working for the Rosenbach family, discovering art and literature, awakening to feelings of love, and dreaming of being an educated woman. A seamlessly written novel with a brave, new heroine.

Echo is a story within a story within a story that begins in the forbidden forest, where a boy emerges with a magical harmonica. The harmonica makes its way to Germany in 1933, Pennsylvania in 1935, and California in 1942, where children are in need of its special powers. Through challenging times and circumstances, the harmonica offers its players life-saving opportunities, connecting them by the “same silken thread,” and eventually bringing them all together in a magnificent concert. Boldly imaginative and beautifully written.