Posted on October 27, 2015 By Hilltown Families 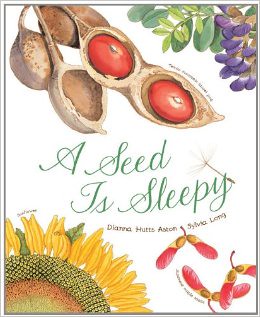 Filled with beautiful, intricately detailed illustrations of fascinating seeds from around the world, Dianna Hutts Aston and Sylvia Long’s A Seed is Sleepy is a visual treat. Paired with rich adjectives that succinctly describe the unique and interesting qualities of a wide variety of seeds, the watercolor illustrations give the book an almost guide-like quality, allowing readers to examine the fine detail of each seed depicted. Readers of all ages can easily fall in love with the book which, rather than telling a story, focuses on teaching those who peruse its pages about the life cycle of seeds.

Not your average seeds-to-plants life cycle book, A Seed is Sleepy includes seeds familiar to American readers like dandelion, sunflower, pumpkin, and corn, and includes many rare and/or unfamiliar seeds from far-flung locales, including monkey’s comb, Guyanese wild coffee, hog plum, and the extinct date palm. The depth with which the science of seeds is considered within the book makes it appealing to readers of literally any age – even adults will love it!

Additionally, within the pages are three separate stories and three levels of depth with which to read. Large, swirling cursive crosses the pages, introducing each spread with a single descriptive sentence; young readers can easily understand these sentences and the length of the story when read in this way fits the attention span of a young reader well. Many pages also include a secondary smaller sentence or two (also written in cursive) to explain the meaning of the adjective included in the page’s larger text. When seeds are described as secretive, for example, readers can read an almost footnote-like sentence that explains that seeds do not reveal themselves too quickly – further explaining the word choice and teaching readers the meaning of what may have been an unfamiliar vocabulary word. Finally, older readers and/or those using the story as a source of scientific information can read a third piece of writing that explains the science behind the quality described on each spread. The secretive seed pages, for example, include small text that explains that seeds wait anywhere from a few months to an entire decade before sprouting.

The detail with which seeds of many types are explained makes A Seed is Sleepy ideal for use as a science text rather in addition to its role as a piece of literature. While the book doesn’t include an index for locating specific species within its pages, its illustrations can serve as a reference for learning about the shape, size, and habits of nearly 40 different fascinating seeds.

Using our accompanying literature guide, families can use A Seed is Sleepy to help them delve deep into the science of seeds, and can extend their studies to include seed-inspired vocabulary acquisition, sorting and identification, and the creation of a seed bank and seed museum.