Posted on October 13, 2015 By Hilltown Families

Known around the world as mommets, hodmedods, spaventapasseri, vogelscheuche, fugleskremsel, and kakashi, scarecrows have been used to protect crops for over 3,000 years! Studies of this traditional autumn icon can reveal not only the international roots of the straw-stuffed beings, but can lead to creative-free play, intergenerational creative collaboration, and exploration of folk farming techniques used locally and around the world. 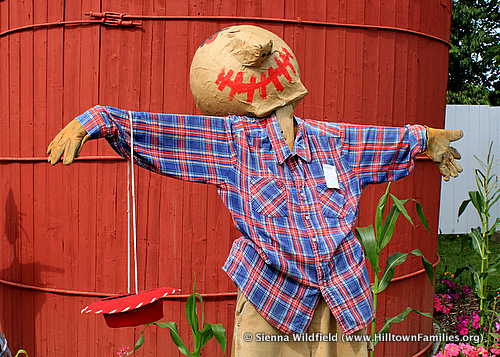 The history of scarecrows begins in Egypt, where the earliest records of the use of scarecrows have been found. Rather than using models of humans, farmers along the Nile River built wooden frames with nets in their wheat fields, and used their scarecrow-like devices to trap quail who would visit their fields to feast on wheat. So, rather than scaring away birds, these early scarecrow-users actually protected their crops and caught their dinner at the same time!

Not long after the Egyptians’ development of scarecrow-like tools, Greek farmers began carving wooden sculptures of Priapus, son of the god Dionysus and the goddess Aphrodite. Priapus, according to Greek mythology, was said to be very ugly and, luckily for farmers using his likeness, when he played in the fields of the vineyard on which he lived, the birds flew away afraid and left the crops alone.

Over time, scarecrow-like bird-scaring tools were developed in cultures all over the world, the most notable of which include Japan, Italy (during the time of the Romans), Germany (during the Middle Ages), and medieval Britain. Native North Americans sometimes used similar tools to guard their own crops, but relied more heavily on live humans to deter birds from devouring their harvests. Today, scarecrows can still be seen in the fields of farmers, but are usually only used in small-scale farming operations. Larger farms tend to utilize bird-scaring tools like shiny polyester PET film, hawk kites, and balloons, as well as more serious tools like propane-powered noise guns, inflatable dancing characters, and even dead birds.

This autumn, families can explore the use of scarecrows and similar bird-deterrents used by local farmers by visiting local farms, exploring and/or observing fields (with the permission of farmers), and by asking questions of farm employees during visits to farm stands and stores in search of local food. Local farmers may employ a variety of bird-scaring devices based on the crops they grow and the scale of their farming operation, as well as the cost of materials, availability of farm workers to maintain bird-deterrents, and some of the ethical questions that come with the use of certain tools.

Families can engage in celebrations of the history of scarecrows and their role in our modern celebrations of fall by creating their own scarecrows at home! By creatively reusing old clothes and, in the absence of hay, recycling paper or packing materials as stuffing, families can engage in creative-free play while crafting their own unique Halloween decoration (or bird-deterrent, if you’d prefer!). Additionally, families can further their appreciation of scarecrows and scarecrow-making in the intergenerational environments offered by upcoming fall festivals and scarecrow-making events. 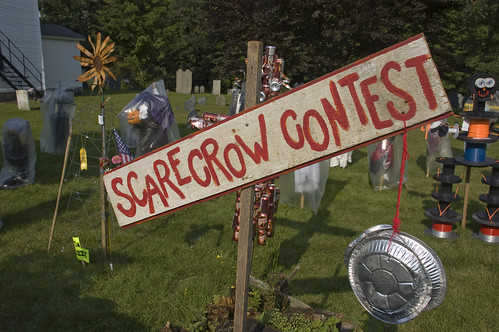 Check our list of Weekly Suggested Events in the Autumn for scarecrow contests, celebrations and workshops happening in the region!