Off the Mat: Fairies Gather Here

Posted on September 7, 2015 By Hilltown Families 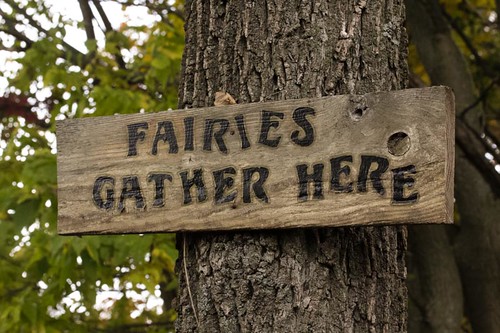 There’s a magic to childhood, especially early childhood. Developmentally, I’m told, it’ll last another year, two tops. Yet I don’t want my son to lose his belief in magic. I (want to) believe in fairies. I want my son to stay open to that which he cannot see.

What did Dwagon do today?

My son prompts our bedtime story, then leaves the telling to me. Blurring the line between real and imaginary, I spin an improvised tale of a magical dragon who lives in the Holyoke Range. Dragon often finds himself in similar situations to my guy, with similar fears and worries.

Given our nightly sojourns with his magical friend, I’m surprised by my kiddo’s early summer assertion that fairies aren’t real. He turned to me for confirmation,

Just because you can’t see something doesn’t mean it’s not there.

I was relieved when he accepted this at face value, then gladly helped his human playmate build a fairy house. Later that day, he constructed more under our lilac bush.

It took a while to find my stash of confetti hearts that night. A few sprinkled around the entrance seemed enough to create the intended effect.

The next morning, I lingered at the sink, watching out the window. A perfect vantage to observe his discovery.

I fink I wiww go check on my faiwy house.

Over the following weeks, he had regular exchanges with the fairies. You could tell when they’d spent the night because things sparkled more the next day. (Glitter modge podge may have been used.)

Evidence the fairies enjoyed a campfire.

We researched – both the Hitchcock Center and Jones Library have good fairy guidebooks.

We learned – fairies protect the natural world. They like houses built of natural items that are no longer living. During the day, they sleep or disguise themselves as butterflies. Some nights they light fires in the fire ring. (Who knew I’d married a pyro?)

We imagined ourselves as a fairy campground, giving Airbnb a new meaning. Recommendations spread fast in the fairy kingdom. Our lilacs were booked solid with grateful fairy guests all summer.

We hosted new human neighbors one idyllic summer night. Up well after dark, my early-to-bed boy knew this was a rare treat he wasn’t going to squander. So rather than vying for my attention while the adults conversed on the patio, he ran and played with a new friend in the damp evening air.

During one dash past the lilacs, he stopped in his tracks.

Sure enough, that corner of the lilac bush did seem to glow more brightly than the moonshadows around.

Fast forward a few weeks to the night before Kindergarten. Bag is packed. Clothes laid out. Boy cleaned, trimmed, and snuggled into bed. Time for Dragon story.

He begins, as always, What did Dwagon do today?

He came to play with you, right?

And you two got a big piece of paper to color…

What did Dwagon say when two wings came out fwom behind me and I fwew up in da aiw befowe he did?

You did? Wow! Dragon said, hey, how’d you do that? And what did you say?

I said, da faiwies gave dem to me.

Oh, cool! So you and Dragon flew off for the day…

The night before kindergarten, the fairies gave my child magical wings. He begins writing his own story.