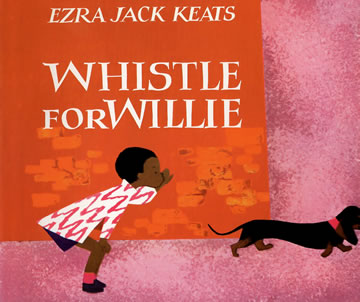 One of many wonderful and beloved children’s books by Ezra Jack Keats, Whistle for Willie is a simple story that perfectly captures the play-based learning that is essential to early childhood. The child engaging in such play is a character named Peter, a young boy who graces the pages of six of Keats’ other stories as well.

Whistle for Willie begins as Peter is exploring his neighborhood one afternoon, wishing desperately that he could whistle. Peter observes an older boy whistling to summon his pet dog, and longs to do the same – but he just can’t seem to make his lips work properly. Throughout the rest of the story, Peter alternates between longing for the ability to whistle and engaging in creative free play using chalk, a mirror, and even an empty box that he finds on the street. Peter’s play is unstructured and driven by impulse, and echoes the play that all children engage in during early childhood. Young readers can easily relate to both Peter’s play and his desire to be just a little bit more grown up (and to prove this growth by whistling loud and clear!).

In addition to Keats’ spot-on portrayal of childhood play and discovery, the book is important within the realm of children’s literature because it features a black protagonist yet does not address the character’s race – in other words, Peter is black, but the story is not about the fact that he is black. While this is common in modern children’s literature, when Whistle for Willie was published in 1964, such stories were far less common. In fact, Keats’ first story, the ever-popular The Snowy Day, also features Peter, and was at first met with criticism because it too featured a black protagonist without addressing the theme of race. While it is important for children to have access to literature that does allow them a critical look at race, it is equally as important for children to have access to literature that features characters of any race engaging in acts that are part of the human experience – and Whistle for Willie does exactly that.

Using our literary guide, families can support young readers in deepening their understanding of the story and in engaging in constructive yet unstructured creative free play. Designed for use with children ages 4-7, the activities in our literary guide appeal to young children whose learning is play-based, and who are excited to use play to explore and learn about their world. Ideas for extension activities include experimenting with cardboard boxes as toys, engaging in interesting sensory activities and physical motions as a means of exploring surroundings, sharing small skills, and learning more about the character Peter by reading more of Keats’ books. Additionally, a mini-lesson plan outlines an activity where children use the story as a catalyst for learning about their own shadows through play, allowing them to observe, experiment, and draw conclusions about shadows and light.

← Open Sesame: More Than One Side To A Story
Soup’s On: Picky Eaters, Part 3 →