Online Resource Provides Close-Up Look at the Art of Illustration 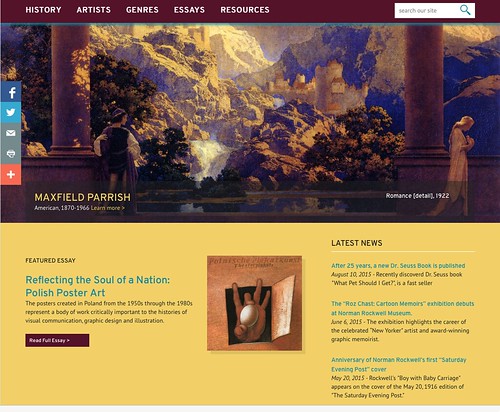 Launched just recently, Illustration History serves as both an educational resource and an archive, broadening the possibilities for learning with an extensive database of images and information about artists and illustration history.

The bulk of Illustration History’s kid-friendly online resources are present within the artists and genres sections, where users can find biographical information on hundreds of notable illustrators from Ben Franklin to Andy Warhol or peruse fine examples of illustration genres from product advertisements and book covers to political cartoons and tattoos. Within each of these subsections are opportunities for users to explore time periods in illustration history as well as artists who are either relevant to a particular genre or who share a technique or style with another artist – thus allowing investigations into illustration history to easily have great depth and breadth.

In addition to exploring the rich resources offered within Illustration History, families can use the online resource to bolster studies of history, cultural change, economics, and technological development. Viewing examples of political and public service advertising alongside a study of a particular decade (like 1940-1950 or 1950-1960) could help children learn about the ways in which major historical events like World War II or the Vietnam War affected the messages shared with country and the ways in which they were conveyed. Similarly, examining corporate promotion and product advertisement illustrations can help children learn about the ways in which companies use information about consumers’ culture, needs, and economic standing to create advertisements that work.