Literary Guide for Farley Mowat’s “Owls in the Family”

Posted on August 4, 2015 By Hilltown Families

Literary Guide for Farley Mowat’s Owls in the Family 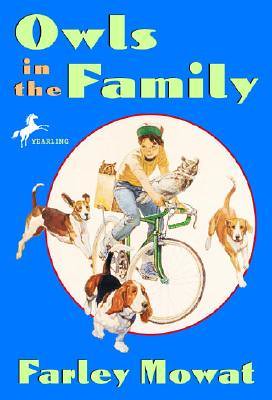 Download Literary Guide for Farley Mowat’s Owls in the Family

Bird enthusiasts rejoice – the next installation of our 2015 Summer Reading Resource series is Owls in the Family! Inspired by true events in author Farley Mowat’s childhood in northern Canada, Owls in the Family is charming, humorous, and full of adventures involving creatures of all kinds. As the title suggests, two of the story’s main characters are Great Horned Owls who have been adopted by a human family. Set in rural Saskatchewan, the story revolves around the owls, Weeps and Wol, and Billy, their rescuer, and follows the trio through a series of adventures.

Weeps and Wol, both saved from grim fates, are the stars of Billy’s pet collection. The owls share the spotlight with snakes, gophers, and other small creatures common to the plains of western Canada. Each chapter of the book features a different story of adventure involving Billy, his friends, and either Weeps or Wol (or both, often). Readers follow Billy through the training of the owls, a community pet parade, days swimming on the banks of a river, trips to school with owls in tow, and a move to the big city of Toronto, among other things.

Throughout the story, readers are drawn close to the natural world surrounding Billy and learn about the Saskatchewan landscape as Billy narrates trips out into the grasslands surrounding his small town. Owls in the Family is much more than just an animal story – while young readers may be initially drawn to the animal theme of the story, the book also challenges readers to think about their own connection to the natural world surrounding them and to question the relationship that humans have with wild animals. The vignette-style structure of the book makes the book more about the theme of the natural world than anything else – the connection between humans and nature is the common thread that pulls the story together.

By utilizing the accompanying literary guide, families can support budding chapter-book-readers in the pursuit of independent reading while also supporting readers in learning about all things owl– and creature-related. Featuring a mini-lesson on visualization and the importance of mental images alongside a wide variety of ideas for extension activities (everything from map-making to exploring animal protection laws), our literary guide for Owls in the Family is rich with resources for combining family reading time with self-directed and community-based learning.