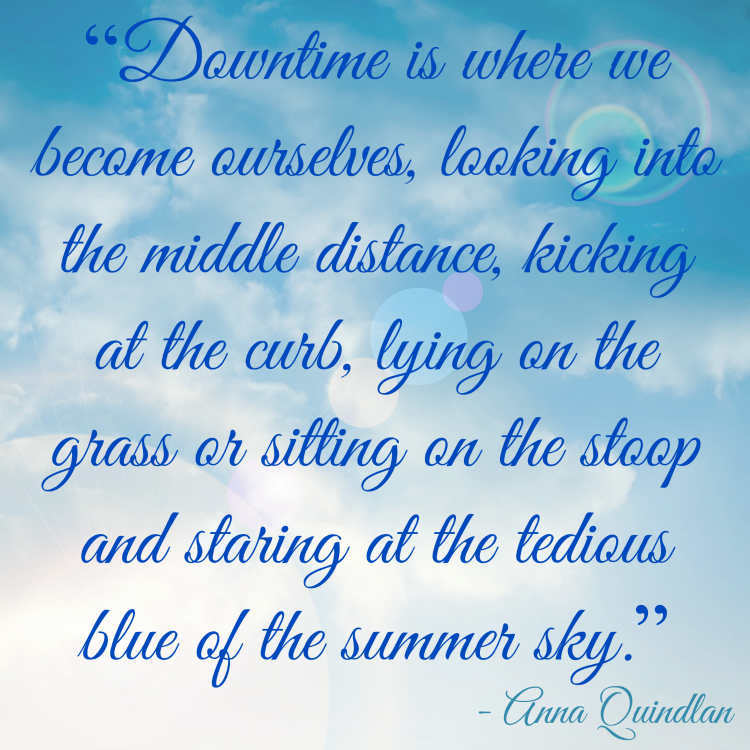 “Downtime is where we become ourselves, looking into the middle distance, kicking at the curb, lying on the grass or sitting on the stoop and staring at the tedious blue of the summer sky.”  I wish I had said this, but it was written in an essay by the always amazing Anna Quindlan. She has captured all that summer was meant to be in a single phrase.  I love this idea, but do I have the mettle to allow this to happen in my own family this summer?

As a child I had this down time thing, well, down.  I don’t recall playing with neighborhood kids much, and my brother Charlie was a solitary scientist who preferred to engineer his erector sets sans soeur.  He once agreed to play wildlife rescuer with me but after he tagged my toe with a piece of wire that ripped my foot open, the fun was over.  My mom isn’t around to ask any more, but I don’t remember being bored in the summer.  I liked being alone.  In fact, in my memory, my mother wasn’t even there.  Banana Popscicles, running from the DEET spewed by the “Buggler,” (as Charlie and I called it) and drinking red Kool Aid in the shady grass were good times.  Really.

Doing nothing much should be the easiest thing we ever do, yet my kids don’t know how to do it, and it is my fault.  From very young ages I had them crawling through finger paint taped on the floor, picnicking at Tanglewood, and flipping fish to the penguins “Behind the Scenes” at the zoo.  Summers have been filled with Fishing Camp, Live Like a Pioneer Camp, and a Survival Skills Camp where I paid someone else to watch my son eat worms.  Downtime is a concept they dimly understand, but their version involves a home movie and me making homemade popcorn while they sell me Dots we purchased earlier in the day.  Sometimes we make tickets…and create an intermission show…with costumes.  My kids don’t know how to do down time because I don’t know how to do down time.

So what happened?  First of all, parenting changed.  Our parents read Spock, we read Sears.  Independent, free-range kids gave way to well-bonded, well-curated children of the new millennium.  Our expectations for ourselves as parents can resemble an assent to the summit of K2. Work changed.  Somewhere along the line the work ethic among us became turbo charged, and we are uber serious about our work. We can be reached 24-7, and we have the personal computers and cell phones to make it happen, even on vacation.  Entertainment changed.  Personal devices and video games took the place of MTV music videos and the Rick Dees Weekly Top 40. Communication changed.  My parents had one harvest gold phone in the kitchen, and it was so cool when my dad got an 8 ft cord that would allow me to talk to my friends privately while sitting on the basement stairs.  But one thing we NEVER did was call LONG DISTANCE.  Cell phones and video calling changed all that, and now we can stay in touch with more friends and family.  There are more opportunities than ever before for enrichment, and I love living at this time.

But I also loved the slower solitude of my own childhood, and have been thinking of how I might instill some of that sweet stillness in my own children.  Do I have what it takes to make it through endless choruses of the summer-I-don’t-know-what-to-do-blues?  Maybe this time-crunch-crazy-train is not their own making, but they are products of their time.  I am now, too, which is why I may be guilty of over-doing instead of just being, like I used to back in the day.  Maybe if I do more nothing, my kids will, too. And, like Ms, Quindlan says, we will become ourselves.