The feeling of a summer thunderstorm is familiar to us all – the temperature drops, the breeze cools, bright leaves rustle endlessly louder, and a distant echo of thunder rolls across the darkening sky. Though they can be scary for youngsters (and anxious pets), thunderstorms are an important part of summer weather, bringing much-needed rain to the landscape and cooling the oppressive heat that hangs in July’s muggy air. 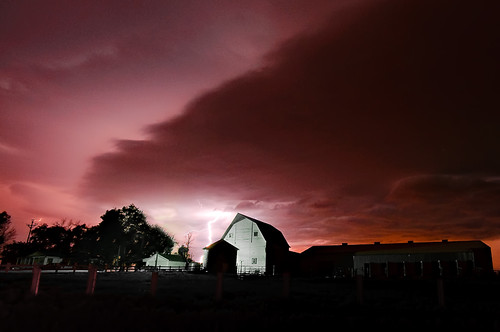 Thunderstorms remained quite mysterious for centuries, and cultures worldwide have developed a variety of folktales to explain their occurrence. In Nigeria, a tale of a sheep and its ram son says that thunder and lightning come from the creatures, whose bad behavior resulted in them being banished to the skies. North American Eskimo tribes share a cautionary tale wherein children too noisy to play at home turn into thunder-causing ghosts. There’s even a tall tale about Henry Hudson that explains thunder as the sound of gnomes bowling in the Catskills.

An exciting natural event, thunderstorms are fairly complex. While the basic principles of such noisy, crashing weather are easy enough to explain, the reasons for some of a thunderstorm’s elements are not so simple to decipher. The storms themselves occur when a cold front moves quickly into an area filled with warm air. As cold air is heavier than warm air, the cold front pushes warm air up and out of its way. When the rising warm, moist air meets the approaching cold front, it cools and condenses into cumulonimbus clouds – the rolling, billowing clouds characteristic of summer storms. However, what we don’t completely understand is the cause of lightning. While scientists agree that it has to do with varying charges amongst particles in storm clouds, research has yet to reveal the more specific reasons for the electric charges. 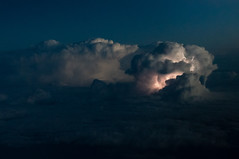 The oncoming thunderstorm brings a menacing but exciting tone. They are endlessly fascinating and a great source for learning.

Whether or not we can fully understand lightning, thunderstorms themselves are a fascinating topic to study in the summer time. Conveniently, this summer’s weather has provided us all with ample personal experience with thunderstorms, meaning that curious young learners can support studies of storms by thinking about the things they’ve seen, heard, and felt during thunderstorms.

One simple and informative way to learn about the air currents that cause thunderstorms (called convection currents, as the hot air rises) is to do a simple experiment at home. Instead of relying on moving air, families can replicate currents with water, using food coloring to observe the motion of the molecules. Before experimenting, freeze an ice cube with blue food coloring in it. Once it has frozen, drop it into one side of a flat-bottomed contained of still water. Then, drop some red food coloring on the other side of the container. Watch as the colors move across the container – as the ice cube melts, blue food coloring will move across the bottom of the container, and red will float above it, just like the warm and cold air currents behave before a storm takes place.

Once kids understand how air currents cause storms, a summer filled with thunderstorms becomes an entirely different beast. A loud, wet, and scary occurrence can be transformed into something fascinating once its cause is understood. Enthusiastic cloud watchers can turn studies of thunderstorm clouds into a Citizen Science project by participating in NASA’s S’COOL cloud-watching program, a project that allows NASA to pair observations of clouds with data collected by special satellites.

To continue the weather theme at home, listen to our archived weather-themed episode of the Hilltown Families Variety Show. Additionally, check out these thunderstorm-themed titles to learn more about the science behind storms, and the ways in which they effect people in all geographic locations: 18 Story Books on Weather for Kids.