Off the Mat: Letting People Help 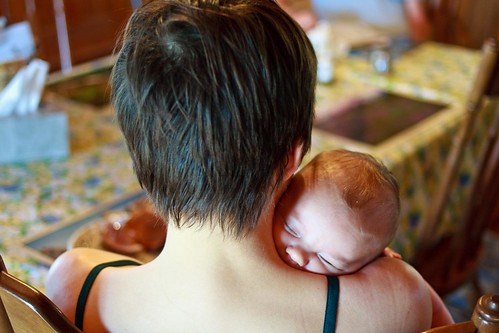 Yoga instructor and pain specialist Ginny Hamilton has never been good at asking for help. In this month’s Off the Mat: Reflections on the Practice of Parenting, she shares a story of independence and interdependence from her first days of motherhood.

I’ve always been fiercely independent, which is not necessarily a useful trait in the blurry days of new motherhood. Pushing 40, it was my first time around – and for me the only time. Thankfully, my sister came to help. She played with her newborn nephew overnight so I could sleep, taught us to swaddle, and fed me while I fed him. And she provided the other main support I wanted: company as I tried to go about daily business by myself. I drove, baby in back, sis in the passenger’s seat. We took the subway downtown, bought button-down tops to make nursing easier, and she stood guard as I nursed in a dressing room.

The store clerk, an older woman with a Middle Eastern accent, cooed over my tiny son curled up in the ergo carrier. “I’m amazed at how people in this country bring babies out so young. In my country, the mother stays home. Aunties bring what you need to you.” Her tone wasn’t critical. More sympathetic, offering condolences.  A week later I was at the grocery store, solo, and determined to get everything on my list with a newborn swaddled to my torso. I told myself it was not so different, really, than when he was growing inside and my huge belly made it hard to get around.

No different, until the juice aisle. The economy jar I wanted was on the bottom shelf. Still sore in my postpartum body, squatting wasn’t an option. How far could I bend over without tipping him out the top, waking him at least – unleashing the tiny pterodactyl cries perfectly pitched for newly minted Mama ears. Endearing or annoying to others.

Another woman came up the aisle as I began the gymnastics to reach the juice on the bottom shelf.

“Let me help you” she moved forward, and faster.

“No, it’s ok.” I kept going. But she got there first. Squatting below baby and me, standing up and putting the juice in my cart, she held eye contact.

She was in her 50s at the oldest. Graying around the edges. Probably had teens at home, maybe college. Or maybe a late one still in childhood. Fit. Confident. A middle aged middle class educated white woman being bold.

I don’t remember if I responded verbally, other than (I hope!) to say thanks.

We didn’t talk more. She went on with her shopping and I mine. No cooing or how old or I remember when. Just her knowing gaze. Her own fierce independence recognizing mine. It takes a village requires letting the villagers play their role – swap after care and carpool and offer hand me downs and bring meals and load your groceries.

I still pack my own grocery bags, in large part because I know where I want things to go in my kitchen. Plus it feels strange to stand there doing nothing while I watch another person pack my food. Beyond bagging, that grocery store offers assistance to the car. I had always declined – even with big loads and a big belly. But that particular day, when the cashier asked if I’d like help loading my car, I said yes.

← Take Me to the River: Honor Your Watershed at Shelburne Falls RiverFest
The Fabric of History in Western Mass Weaves a Tale →