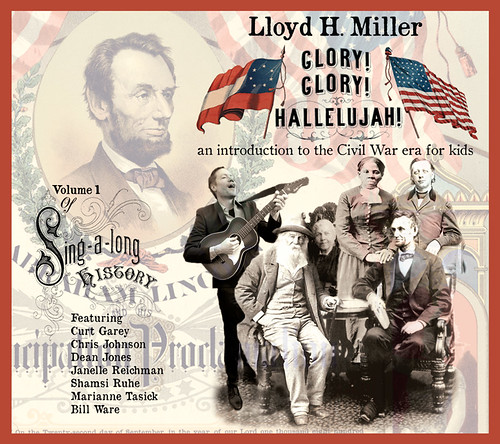 Use music as a lens for learning about history – Lloyd Miller (of The Deedle Deedle Dees fame) has just released a new Civil War-themed album filled with traditional and original music. Using a curriculum created by Miller, as well as a wealth of other resources, families can use music as an entry point for learning about an important time period in American history.

Glory, glory, hallelujah! Lloyd Miller‘s newest album offers opportunities for learning about the Civil War through the lens of music! Titled, Sing-a-long History, Vol. I: Glory! Glory! Hallelujah!, the album is filled with a mix of traditional songs from the late 19th century, historic pieces of writing set to original music, and Civil War-themed songs created just for the album. Overall, the album provides an engaging musical examination of many of the big ideas involved in studying the Civil War – abolition, the Underground Railroad, warfare tactics, and the experience of slavery. Simply adding the album to a family CD rotation would spark lyrics-based learning, but thanks to a handful of other resources, families and educators can use Miller’s album to spark experiential, multidisciplinary learning about the Civil War!

To accompany the album, Miller has created a curriculum guide that pairs the lyrics for each album track with explanations of the song’s historical significance, short lesson plans for multiple age groups, and suggestions for further read, viewing, and/or listening about the topic that the song addresses. Newly introduced, the curriculum has been described as a “working document” by Miller, and feedback from anyone who uses it is welcomed.

Additionally, Miller has begun a new Podcast based on the album. Debuted last week, episode one of Sing-a-Long History: The Podcast includes a host of soldier songs, all paired with historical information. For further auditory learning opportunities, check out our archived Underground Railroad episode of the Hilltown Family Variety Show! Lloyd Miller pairs this episode with an original 7-question quiz that listeners can take afterward to test their understanding of the episode!

Families can also put what they learn from Glory! Glory! Hallelujah! into context within local history by taking a historic walking tour. A family is encouraged to explore tours of downtown Florence, Historic Deerfield, and the Berkshires in order to put people and events into the context of local history in order to better understand their significance.