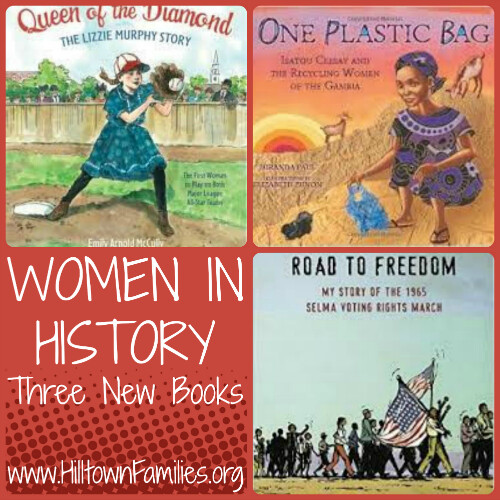 For more than thirty years, the National Women’s History Project has been devoted to “writing women back into history.” They created a national clearinghouse of multicultural women’s history, which includes information, materials, resources, referrals, training and strategies to anyone interested in learning about women’s roles in American history. Their successful lobbying efforts led Congress to recognize March as Women’s History Month, which has become a time to celebrate the bold and beautiful, courageous and curious, strong, smart, and compassionate women in our collective history. We have so much to learn from their example, which is why we need to keep getting books about these women into children’s hands. Here are three new books that recognize girls with big dreams. But first, recognition of a local woman who left her imprint on American history and on our own local history…

Born in 1923, activist and war-tax resister, Juanita Nelson lived by her own simple standard: “your life is your action.” She spent decades working for desegregation, civil rights, community activism, and local agriculture. Dedicated to pacifism in every aspect of life, from participating in nonviolent protests to being a war tax resister to homesteading off the grid, Juanita was a testament to the power of the peaceful. She and her husband, Wally, settled at Woolman Hill in Deerfield in 1974, and during their long tenure in the area, they helped organize the Greenfield Farmers’ Market, Pioneer Valley War Tax Resisters, Valley Community Land Trust, and Greenfield’s Free Harvest Supper. Juanita passed away earlier this month at the age of 91, but her legacy survives in the many projects she helped spearhead that are still thriving in our community. To learn more about her, visit Memorial Hall’s online museum, where you can read interviews and listen to her oral history, www.memorialhall.mass.edu.

Queen of The Diamond: The Lizzie Murphy Story is a picture book biography beginning in 1900 in Warren, Rhode Island, where Lizzie Murphy grew up playing baseball with her father and brother. It was evident from an early age that Lizzie was a natural, and better at it than most boys. Hungry for playing first base, she convinced her brother’s coach to let her on the team, first as a batboy, and then as a player. By the time she was 15, she was excelling at what was considered a “man’s” sport on all male semi-pro teams, and by 18, had signed a contract with a professional baseball team. Overcoming years of opposition, and determined to earn a living while playing ball, she went on to have a seventeen year career, even selling postcards of herself between innings. Lizzie “Spike” Murphy became the first woman to play on both the New England and America League’s All-Star teams, and covered first base in a game in the Negro league. A fantastic storyline paired with McCully’s signature watercolor illustrations capture the times and emotions in every scene. Lovers of the game will enjoy this exciting story of the girl who became the queen of baseball.

One Plastic Bag: Isatou Ceesay and the Recycling Women of the Gambia is a picture book biography set in Njau, Gambia, where Isatou Ceesay grew up. As a girl, Isatou realized the goats on which her village depended were dying from eating plastic bags. The plastic bags were tossed everywhere. Unlike the broken baskets which when tossed on the ground were biodegradable, ripped plastic bags only piled on roadsides, collected water which bred mosquitoes, harmed gardens, and destroyed livestock. Plus uncontrolled burning of the bags affected air quality. Isatou hatched a brilliant idea to recycle the bags into purses by crocheting them together. She turned her idea into a small business, which nearly twenty years later is a co-op with more than sixty women, who are earning income for their families. Isatou’s creative solution to this real-world problem has had a lasting impact on Njau and its women. Recycling the bags continues to protect the environment and brings positive economic change to the community. The book’s spare, simple text and colorful collage portray the sights, sounds, and tastes of Gambia with authentic detail. Includes Author’s Note, Wolof Glossary and Punctuation Guide, Timeline, and Further Reading. Young upcyclists will be inspired by Isatou’s story, and may want to watch video of the purses being made at oneplasticbag.com.

Turning 15 on the Road to Freedom: My Story of the Selma Voting Rights March is a memoir from one of the youngest heroes of the Civil Rights Movement – Lynda Blackmon Lowery. Born in Selma, Alabama, in 1950, Lowery grew up with a powerful conviction in the right to vote, and was jailed nine times before her 15th birthday. Her first person narrative is immediate, straightforward, and absolutely riveting. She shares incredible details of her experience, from hearing Dr. Martin Luther King Jr. preach about “steady, loving confrontation” and the power of nonviolence to sneaking out of school for protests and passing out in the sweatbox. Illustrations combined with historic photos bring another dynamic to this incredible life story. Lowery ends the narrative with a reminder to readers about the importance of maintaining voting rights and how even today, the Voting Rights Act continues to be amended by government. Young adults will be stirred by Lowery’s courage, faith, and conviction during a turbulent time in American history.