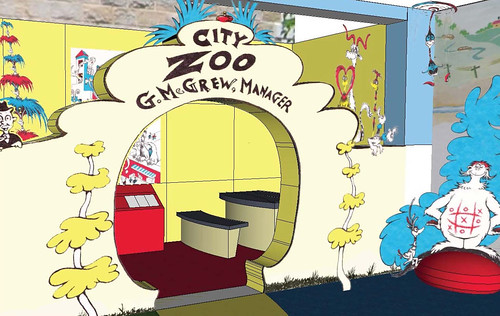 Given the worldwide impact of Dr. Seuss’ work, it’s hard to believe that there is no museum in his honor. That is set to change in 2016, when the Springfield Museums will open the first museum dedicated to celebrating the life and legacy of Springfield native Theodor Seuss Geisel.

Plans are now underway for the creation of The Amazing World of Dr. Seuss Museum, which will feature a highly interactive literacy-based exhibition featuring beloved Seuss characters, as well as exhibits to honor Geisel himself and the community which fostered his early development and creative genius. The museum will be housed in the William Pynchon Memorial building on the Springfield Museums campus in downtown Springfield, MA.

Theodor Geisel at his drawing table, courtesy of Elizabeth N. Cahill, collection of the Wood Museum of Springfield History.

Ted Geisel was born and raised in Springfield, and lived primarily in a modest two-story house on Fairfield Street while attending the city’s public schools. After graduating from Dartmouth College, Geisel found early success in the advertising business. But it was his children’s books that ultimately catapulted him to fame, and Ted drew a great deal of his inspiration from his formative years spent in Springfield.

The setting of his first book, And to Think That I Saw It on Mulberry Street, is a real-life Springfield street of the same name located just two blocks from the Springfield Museums campus. Other local landmarks and Springfield references appear in later works, including a tower in The 500 Hats of Bartholomew Cubbins that bears an uncanny resemblance to the armory building located on Howard Street in the city’s downtown.

Following Ted’s death in 1991, his wife Audrey authorized the creation of the Dr. Seuss National Memorial Sculpture Garden, which opened on the Springfield Museums grounds in 2002. The sculptures of Ted and some of his most famous characters were created by his stepdaughter, Lark Grey Diamond Cates, and attract thousands of visitors to Springfield each year. The creation of a new museum with literacy and reading at its core is the logical next step towards creating a more fitting tribute to Ted Geisel and his legacy.

The new museum will be located in the William Pynchon Memorial Building, a grand Georgian Colonial Revival-style structure that sits at the head of the Museums’ Quadrangle green. The building’s first floor is being renovated to house The Amazing World of Dr. Seuss, a permanent, bilingual exhibition designed to introduce children and their families to the stories of Ted Geisel, promote joy in reading, and nurture specific literacy skills.

Visitors will enter the 3,200 square-foot exhibition through a large entry hall designed to simulate elements of And to Think That I Saw It on Mulberry Street. In succeeding galleries, visitors will explore a series of environments that replicate scenes from Dr. Seuss’s imagination and encounter life-sized three-dimensional characters and places from the books. Designers from 42 Design Fab, 5 WITS and Boston Productions are beginning initial fabrication of interactive elements for the first floor, which is scheduled for completion by mid-2016.

The building’s second floor is slated to house additional exhibits including a re-creation of Ted Geisel’s studio, an exhibition about the making of the Dr. Seuss National Memorial Sculpture Garden and other related displays. These additional elements are slated for completion in 2017. A new website titled seussinspringfield.org will be launched in June 2015 and will include detailed information on the new museum, the National Memorial Sculpture Garden, and interactive features to reinforce the literacy-based message of the museum.