Posted on February 25, 2015 By Hilltown Families

Learning through the Lens of Maple Sugar Season 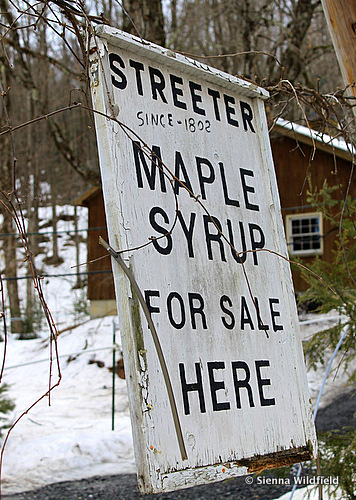 How sweet the end of winter is here in western Massachusetts – and not just because the snow is beginning to melt! Warmer temperatures signal the start of sap flow in sugar maples, whose frozen and sleepy roots and limbs come alive when the landscape begins to thaw. Maple sugaring is a centuries-old tradition in New England, and the seasonal industry remains an important part of the foundation upon which local agricultural is built. Additionally, maple sugaring brings opportunities for families to engage in intergenerational community-based learning through visits to farms, community meals, living history, and experiential hands-on activities.

The start of sugar season is entirely weather dependent, as sap doesn’t begin to flow until temperatures remain above freezing consistently during the day, dropping back down below freezing at night. Luckily for local maple farms, sugar maples are plentiful in western Massachusetts. As it takes 40 gallons of sap to produce one gallon of syrup, maple farmers must drill many, many taps and collect sap for weeks on end in order to have a good, productive, and profitable season.

There are several large-scale maple farms in western Massachusetts, many of which not only produce syrup but also run seasonal sugar shacks or restaurants. Sugar shacks are a great place to enjoy a delicious and locally-sourced meal, and a great way to learn experientially about life on a maple farm. Most sugar shacks allow visitors to visit their evaporator – a large piece of machinery that boils sap into syrup by evaporating water out of it. Additionally, modern sugaring on many farms involves complex systems of tubing that deliver sap straight from trees to collection tanks downhill from sugarbush. A visit to a local farm can reveal many of the secrets of modern sugaring! 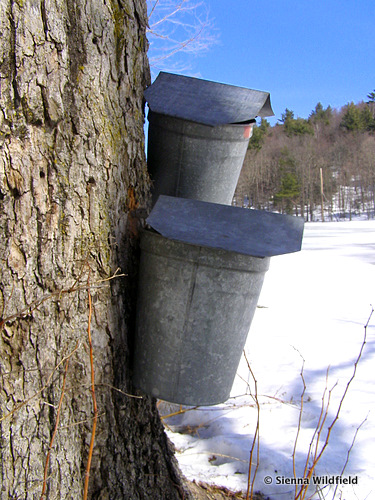 In the past, however, sugaring was a much more labor-intensive process than it is today (which is not to say that it’s easy now, either!). Each tap had to be fitted with a bucket in order to catch the dripping sap. Once sap begins to flow, as long as temperatures cooperate, it runs until it’s done – so buckets would need to be frequently emptied, a process that for hundreds of years involved hauling a horse-pulled sleigh into the woods and hauling sap-filled buckets through melting snow in order to bring it back to the farm for a boil.

Families can experience what maple sugaring was like in the days of old New England through living history events, one of which takes place annually at Storrowton Village Museum in West Springfield. Storrowton’s Maple Harvest Day celebrates the coming of spring, and includes demonstrations of tree tapping, sumac spile making, sap boiling over a fire, open hearth cooking, and other early American skills – all in an authentic early New England village composed of structures from historic communities all over western Massachusetts. Maple Harvest Day takes place this year on Sunday, March 15 from 11am-3pm.  The event is free and is preceded by the West Springfield Lions Club Pancake Breakfast in the Village’s Red Barn from 10am-12noon ($5/pp) to benefit the Museum’s educational programs.

Another living history event takes place at Old Sturbridge Village’s Maple Days, every Saturday and Sunday throughout the month of March. Similar activities happen at OSV’s weekends as take place at Storrowton. Costumed interpreters will answer your questions and show you how maple syrup was tapped, gather and rendered during the Colonial era.  Visitors can also see how sugar molds were made by historic potters and learn how the abolition movement was tied to maple syrup and the use of maple products.

In addition to living history and sugar house visits, families can further engage with their community by attending a community festival to celebrate sugar season and the coming of spring. The town of Chester’s 30th annual Maple Fest on Saturday, March 21 from 9am-3pm, celebrates the role that the tradition has had throughout the town’s history. Families can enjoy all sorts of maple treats produced by local farmers, learn about local syrup production, and perhaps learn some of the skills that they’ll need to try out sugaring for themselves!

Families interested in sugaring can use maple sugar season as an opportunity to support place- and community-based studies of math and science, allowing children to learn new skills and concepts within a meaningful context. In order to successfully produce maple syrup, families must first learn to accurately identify trees. Some farmers joke that poor tree identification leads to the production of “pole syrup” – meaning that tapping anything other than a sugar maple is like tapping a telephone pole! During the winter, tree identification can be tricky. Young naturalists will need to look closely at the tree’s bark, tiny buds, and twig growth patterns in order to identify each species of maple. Identification is easier after trees have leafed out, but once the buds begin to pop, the sap stops running!

On top of species identification, aspiring sugar makers must also learn about the science behind sap, and the math and chemistry that makes it turn from sap to syrup when heated. Collecting sap, measuring its volume, and then calculating the volume of syrup produced after boiling presents the opportunity to explore ratios within a real-world context, and learning how to boil sap with success lends itself nicely to an exploration of boiling points, states of matter, and energy!

Families can further explore the history, culture, and science of sugaring by reading together – Kathryn Lasky’s Sugaring Time and Jessie Haas’ Sugaring share the magic of sugaring season in New England, while Rick Mann’s Backyard Sugarin’ is a comprehensive and accessible guide to home syrup production!

← Let Them Grow: Setting Up the Toddler Who Wants to Get To Work!
Suggested Events for February 28th-March 6th, 2015 →