Off the Mat: Introducing Technicolor

Posted on February 2, 2015 By Hilltown Families 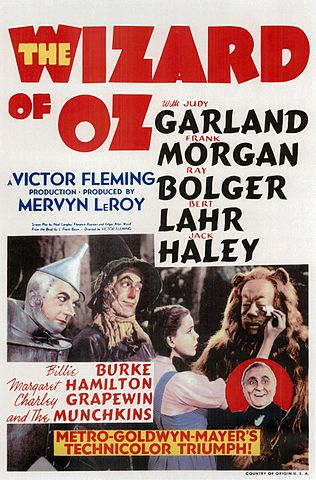 Last month, we took our son to see the Wizard of Oz on the big screen. This all-time favorite had yet to debut on family movie night due to my hubby’s flying monkey terrors. As the one who gets called for nightmares at 2 a.m., I had no need to introduce flying monkeys yet. But the rare chance to watch on a big screen was worth the risk.

We needn’t have worried. In the age of computer generated animation, his baseline of what looks real is vastly different than mine was at age 5. Hoisted up to the movie poster for a Facebook photo op, my kiddo commented on the image of Dorothy and Co. on the yellow brick road,

They’ve all got human faces, Mama.

Yup. All people dressed up in costumes for this one. People in silver and green face paint. To him, it was so obviously pretend that it wasn’t scary. Mostly, he’s been interested in how the Witch dissolved.

I behaved. I didn’t sing along or quote the oh-so-many memorable lines. Mostly, I watched him watching. Except, I couldn’t resist leaning over after that pivotal transition from sepia house – open door – Technicolor Munchkin land,

Her hair is diffwent, Mama.

Color didn’t register for him as it does for me.

I’ve taken my son to recent rallies affirming that Black Lives Matter, explaining to him about Eric Garner and Mike Brown. How police – like most everyone – treat us more nicely because of our white skin than they treat his cousin who is black. I think back to a campus rally 23 years ago after the Rodney King trial. My nephew was 3 weeks old. He’s now a grown man living in NYC.

I can dis-pair. Not be paired, connected, to what is happening. Or I can accept the charge of one of the greatest minds of modern times, Albert Einstein, and teach my child to see race and challenge racism.

“What, however, can the man of good will do to combat this deeply rooted prejudice? He must have the courage to set an example by word and deed, and must watch lest his children become influenced by this racial bias.”

They’re studying the civil rights movement in kindergarten, specifically the Montgomery Bus Boycott and Ruby Bridges, the black first grade girl who integrated her New Orleans elementary school.  His writing and drawing sheets introduce the concepts through comparison: before and after, then and now, same and different, fair and unfair.  In his illustrated “after” narratives, he explains the light skin people are happy because now get to sit with their friends on the bus and they all get to go to the “fancy” schools together. His buses and school rooms utilize the whole spectrum of skin tone crayons. My childhood box had just one peachy-pink labeled “flesh.”

So we talk about how this isn’t just history. The BEFORE and AFTER grid is, not surprisingly, too simplistic. We talk about the schools in Boston where most of the kids have brown skin, no libraries, no books to take home, even no toilet paper in the poorest neighborhoods.  We moved here so he could go to a “fancy” school with kids of different colors.

But I wouldn’t go to one of those schools, Mama. I have peachy pink skin.

Probably not, honey. Our peachy pink skin means people do treat us more nicely. We get more choices. And that’s not fair. So we need to work to make it more fair.

My work is to help him continue to see the real people who inhabit our Technicolor world. And as he grows, to use the safety his color provides to shift the baseline further toward true equality.