Posted on January 27, 2015 By Hilltown Families 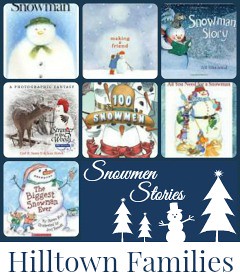 “Do you want to build a snowman?” is a question kids have been asking for far longer than the song made popular by the movie, “Frozen.” And kids will continue to ask whenever the snow falls, because building a snowman is a quintessential act of winter whimsy. One that is working in layers, whether the creator realizes it or not. At its most basic, building a person out of snow is just good, plain fun. When you add a friend or two or three into the mix, building a snowman becomes a cooperative effort, an exercise in teamwork. It requires a playful attitude and an artistic eye. And it never hurts to believe in a bit of magic. For if the stories are true, snowmen do come to life! It also calls for a certain acceptance of impermanence. As even the youngest builders discover, snowmen do not last forever. And as such, the snowman becomes the perfect symbol for the cycles of love, loss, and renewal. With snow in the forecast, isn’t it time to build a snowman?

The Snowman by Raymond Briggs has shown children the enchanted world of snowmen for nearly 40 years.  In this wordless picture book, a young boy builds a snowman, who comes to life that night and takes the boy on a magical flight. Soft and dreamy illustrations unfold in easy-to-follow frames and reveal a special friendship full of palpable emotion. The beloved snowman is a timeless classic for every child.

Snowmen at Night, written by Caralyn Buehner and illustrated by Mark Buehner, reveals the secret society of snowpeople. In the dark of night, they gather together for wintertime frolic. From snowman racing to sipping cold cocoa, these cheeky and charming snowmen prove to be quite busy at night. Rhyming text keeps the story bouncing along, while the nighttime landscape adds mystique in the play of light and shadow. Readers can find more snowmen adventures in other titles by the same team.

In Snowman’s Story, by Will Hillenbrand, animals build a snowman that comes to life when a magic hat lands on his head. Hiding in this hat is a rabbit. And after the snowman reads a storybook and the animals fall asleep, the rabbit leaps away with the book, setting off a comic chase. Rosy-cheeked characters in a soft, wintry landscape help tell the story in this wordless picture book.

The Biggest Snowman Ever, written by Steven Kroll and illustrated by Jeni Bassett, is a sweet picture book about the value of teamwork. When the Mayor of Mouseville announces the town snowman contest, mouse friends, Desmond and Clayton, each vow to make the biggest snowman ever. But soon realize joining forces enables them to do more than they imagine. Wonderfully detailed illustrations, depicting the town and its human-like inhabitants, add to the fun.

Making a Friend, by Alison McGhee and illustrated by Marc Rosenthal, conveys the special joy and friendship between a boy and a snowman. When the snowman melts, the boy, feeling the loss, wonders where his friend has gone. Finding signs of the snowman in the rain, fog, and frost, and being able to build him again in winter, offers comfort and the wisdom that, “What you love will always be with you.” Spare text and simple, but poignant illustration, tell this story about what fades and what lasts.

All You Need for a Snowman, written by Alice Schertle and illustrated by Barbara Lavallee, lists everything you need to create a snowman, starting with the very first flake. Kids, bundled up in colorful parkas and snowsuits, fill the book’s pages. Working together, they build an enormous snowman, showing how many hands make light work.

Stranger in the Woods by Carl R. Sams II & Jan Stoick is a photographic picture book about the appearance of a stranger after a winter storm. Curious, the animals of the forest investigate, and realize the stranger – a snowman – is friendly and covered with treats of nuts, seeds, corn, and carrot just for them. But there are still other strangers in the woods – a pair of children peeking through pine branches.

100 Snowmen, written by Jennifer Arena and illustrated by Stephen Gilpin, features snowmen engaged in a variety of actions, from snowball fighting to stargazing. Through cumulative addition, readers can count up to100 snowmen and back, while delighting in the individual personality of each snowman and their expressive stick arms.