Posted on January 6, 2015 By Hilltown Families 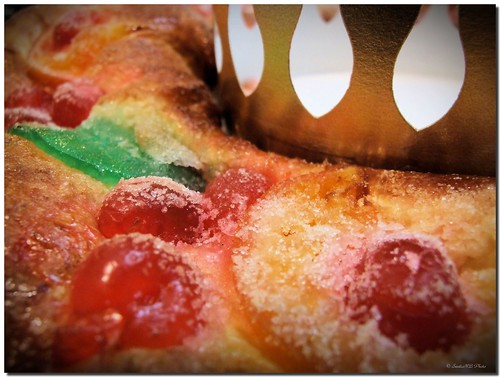 Traditionally, a King’s Cake is eaten on El Dia de Reyes – a sweet ring of bread dotted with fruits and containing a small baby figurine inside. Called Rosca de Reyes in Spanish, the cake is similar to the King Cakes enjoyed during Mardi Gras in the southern United States.

In the United States, Christmas is celebrated on December 25th, bringing with it gifts for everyone! In some cultures, however, gifts aren’t given to children until January 6th, the date on which Three King’s Day is celebrated. A major holiday in Spanish-speaking cultures, Three King’s Day (or El Dia de Reyes) is the celebration of the arrival of the biblical kings to Jerusalem – bringing with them gifts for the newly-born baby Jesus. According to the Christian calendar, January 6th is the Epiphany and, coincidentally, it is also the twelfth day of Christmas. In Spain, Mexico, Puerto Rico, and many other countries (as well as in some communities here in western Massachusetts), children receive their Christmas gifts on Three King’s Day, just as Jesus received gifts of gold, frankincense, and myrrh on that date in the Bible.

Three King’s Day isn’t just a day filled with presents. However – it’s a much bigger celebration than that! Warranting days off from school in some local communities, Three King’s Day involves parties, parades, music, and lots and lots of celebrating! With its cultural roots in Spain, the Three King’s Cavalcade (or Cabalgata de Reyes Magos) has been celebrated on the eve of Three King’s Day since 1866. The Cavalcade brings families to the streets to watch men dressed as the biblical king’s parade through the streets on horseback (though historically speaking, camels would be a more accurate mode of transportation) accompanied by a herd of shepherds and much fanfare – everything from trumpeters and flags to dancers and fireworks.

Following the cavalcade, children receive presents once Three King’s Day arrives. Much like the tradition of leaving out milk and cookies for Santa Clause, children celebrating Three King’s Day leave out small bundles of grass, hay, or straw the night before to feed the camels ridden by the soon-to-arrive kings In the morning, children find their camel-food has been eaten and replaced with presents!

Traditionally, a King’s Cake is eaten – a sweet ring of bread dotted with fruits and containing a small baby figurine inside. Called Rosca de Reyes in Spanish, the cake is similar to the King Cakes enjoyed during Mardi Gras in the southern United States.

Families can learn together about the tradition of Three King’s Day to learn about the differences in Christmas celebrations around the world, and to learn about a cultural celebration enjoyed by those in your own community. For a kid-friendly explanation of the holiday, read or listen to Highlights magazine’s article on Three King’s Day celebrations in Spain. Younger children, for whom picture books might be more appropriate, can learn through a family reading of either Lori Marie Carlson’s Hurray for Three Kings’ Day! or Sandra Robbins’ The Firefly Star: A Hispanic Folk Tale, which provides a non-religious look at the traditions surrounding the holiday. In addition to baking a homemade King’s Cake, children can make their own homemade crowns, and might even enjoy dressing up like a king for a day! And don’t forget to leave out camel snacks the night before – there may be gifts left in return.