The Ripple: The Survival Instinct of the Sea Lamprey Endures…for 460,000,000 years

Posted on December 22, 2014 By Hilltown Families

Why I Love Sea Lampreys 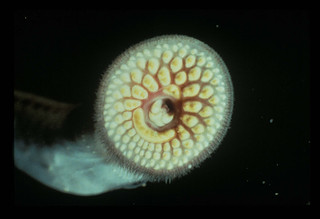 Sea Lampreys: A lot to love, and even more to admire.

Our rivers—the Westfield and the Connecticut—are alive. They could be more alive than they are, but the Holyoke and Turners Falls dams on the Connecticut and the West Springfield dam on the Westfield prevent that vivacity. These dams make anadromous fish (that spend part of their lives in fresh water and another part in salt water) go extinct.

I have wondered how it is that people can allow these extinctions to happen, without feeling absolute horror and guilt, and preventing any more of them. One reason is that we don’t know why their lives are valuable.

The lives of these imperiled fish are valuable, so valuable we should help the dam operators—Holyoke Gas and Electric, and FirstLight—keep inventing better ways to keep them from going extinct.

Of all the anadromous fish who live in the Westfield and Connecticut river, the sea lamprey might be the most amazing in terms of resiliency, and in the way its eel-like appearance disguises its extraordinary strength and intelligence. Lampreys lack jaws, and have a circular sucking mouth instead that is studded with tiny cutical horns. Juveniles live almost like razor clams in the river sands, burrowed in vertical tunnels, filtering the water for microscopic delights. Adults feed by latching onto fish, drilling into their sides, and sucking their blood. Because they lack the big fins and large eyes of fish, we find it difficult to call them beautiful and, given their vampire ways, even harder, to love them. Here—learn more amazing and slightly creepy things about them.

My “judge the book by the cover” view of the lamprey was rattled, however, when I learned that lampreys have been alive for over 460,000,000 years. That’s longer, much longer, than any other fish, or plant or fungus, or amphibian, reptile, bird or mammal. It is hard for us to wrap our heads around such a gigantic number, but suffice it to say that T Rex arrived over 200,000,000 years after lampreys appeared—and where are they now?

To survive this long, lampreys endured the radical changes that occurred between every major geological era—including of course, the comet-crash that happened in the Gulf of Mexico that changed the global climate from sauna to ice-box, killing off the T Rex’s and their ilk (66,000,000 years ago). I was doubly astounded when I realized that they are older, too, than the Connecticut River, and even the Atlantic Ocean (which is only about 200,000,000 years old).

When we see a lamprey swim by the glass panes of the Holyoke fish passage this coming May, we’ll see something far more fabulous than anything humans have conceived or created. The lamprey that makes it over Holyoke Dam this spring carries the sacred spark of life and the architecture-plan for its cells in its DNA, a spark and a plan passed down from generation to generation since long before there were the continents of America, Africa and Eurasia.

Looking at, and appreciating the reality—not the symbol or metaphor—of lampreys provides us with the opportunity to learn three important things: 1, we can kill them if we want; 2, they outclass us when it comes to realizing the main purpose of evolution, which is to ensure that the spark gets transferred from one generation to the next; & 3, that by the same means we use to destroy them—overbearing industrial might—we destroy ourselves.

It is this last reality that moves me, anyway, to act to ensure that lampreys and the other surviving anadromous fish in our rivers stay alive. It is, at once, a selfish and selfless reason: If we love our children, we must love the lampreys.

Lampreys are amongst the oldest species in our Western Massachusetts rivers. We, in comparison, have not even been here 400 years. Their lives are valuable because, at our moment of epochal transition, they express the strength and intelligence it takes to thrive on an ever-changing planet. They are our teachers—of the lesson we must learn if we are to be 1/1,000,000 as successful as they.

← 20 Things We Should Say More Often, by Kid President
Nature Table for December →